A recent Longer View article looked at standout commodities performer palladium. Now, for the dunce of the class: cocoa.

The long history of cocoa ranges from a phase during which it was used as a unit of currency in Mayan and Aztec civilisations, to a dramatic spike in prices during the 1970s.

Almost 200 years of price data reveal that as well as precipitous drops that have melted gains, investors have also enjoyed longish periods of sweeter returns. 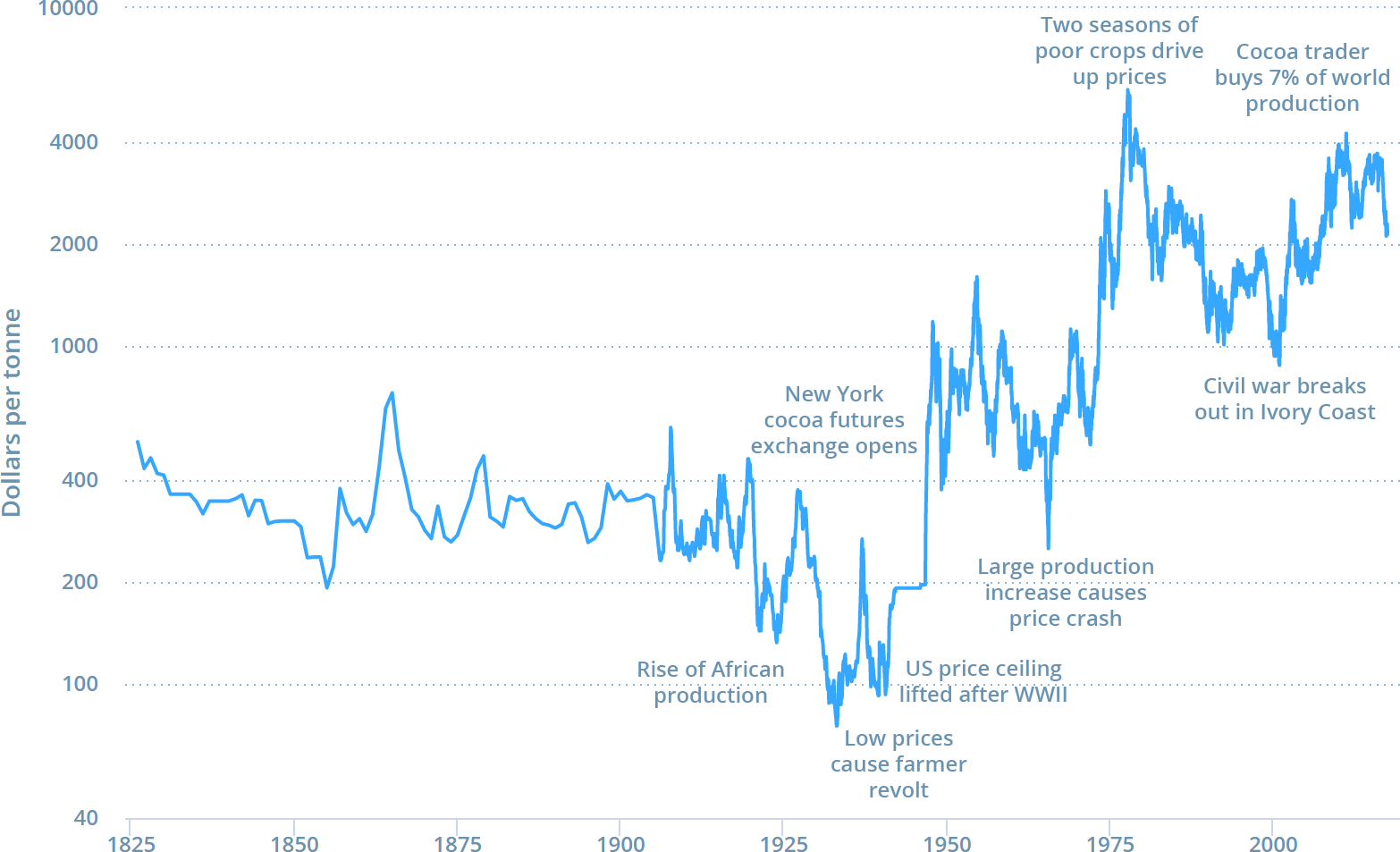 Money That Grows On Trees

Humans have enjoyed the fruits of the cocoa tree for thousands of years. Bitter, spicy chocolate drinks played an important role in Mayan and Aztec society, and the cocoa bean served as a unit of currency. 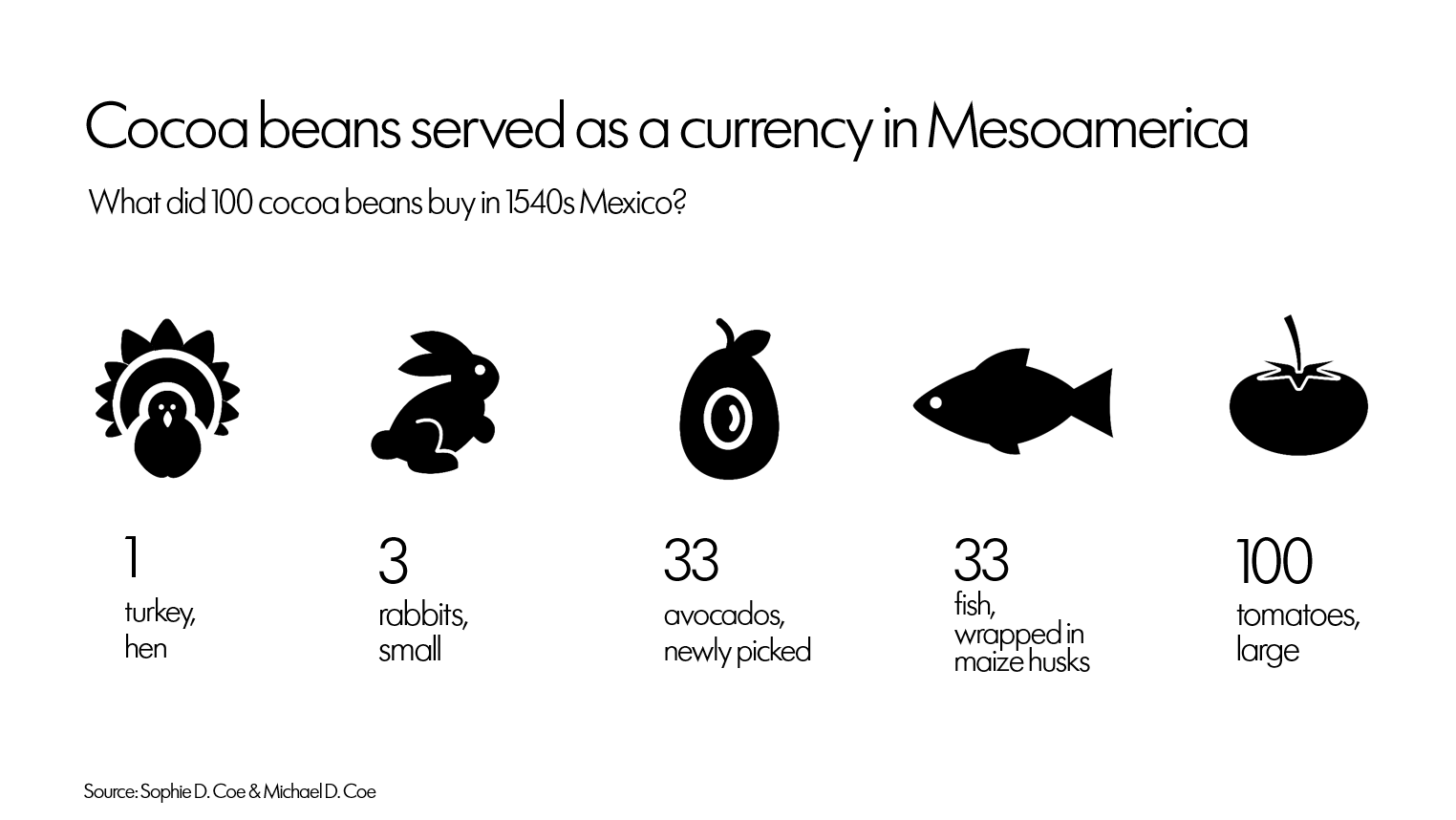 In the 19th century, the production of chocolate was industrialised. Innovations in bean processing paved the way for cocoa powder and chocolate bars. Firms like Cadbury and Nestlé developed chocolate treats for the masses. As production scaled up, factories required guaranteed supply, and forward contract sales proliferated. In London, what had been an informal trade carried out in coffee houses migrated to the Commercial Sale Room at Mincing Lane. Auctions took place on Tuesdays at 11.00.

As late as 1880, South America and the Caribbean accounted for nearly all of world cocoa production. But around the same time, cultivation was beginning to spread to European colonies in Africa. Thanks in large part to mounds of new African supply, world production rose from 115,000 tonnes to 351,000 tonnes between 1900 and 1916. As a result, from 1907, cocoa prices drifted downwards, hitting lows below $100/tonne, and not reaching their previous highs on a sustained basis until the post-World War II demand boom. By 1930, small farmers in places like Ghana, Nigeria, Cameroon, and the Ivory Coast accounted for 65% of world production. 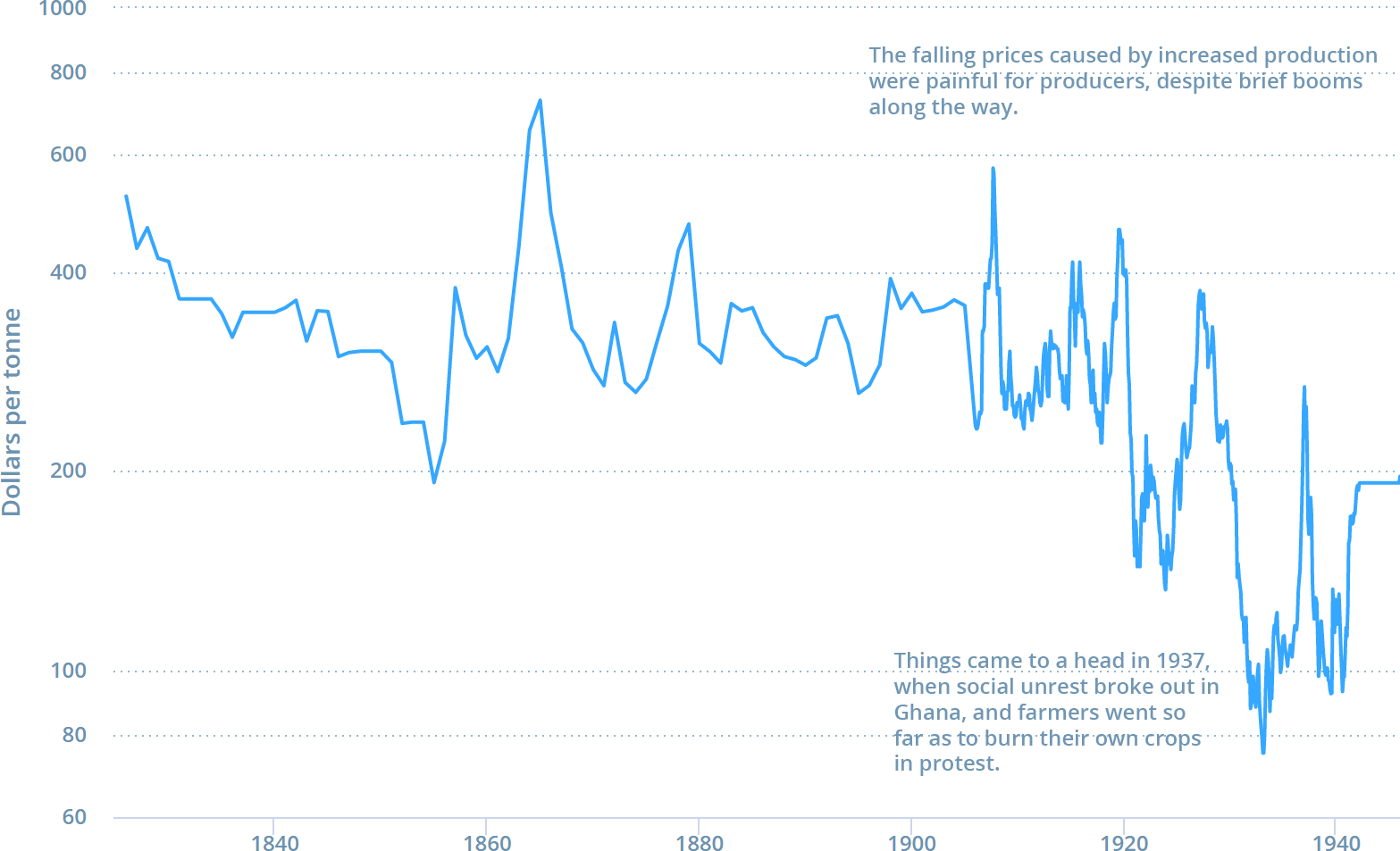 With the goal of ensuring steady supply and protecting farmers, in the 1930s and 1940s, marketing boards were set up in producer countries. Ghana’s marketing board, for instance, controlled exports, managed quality control, and set prices, although just as often at farmers’ expense as to their benefit. 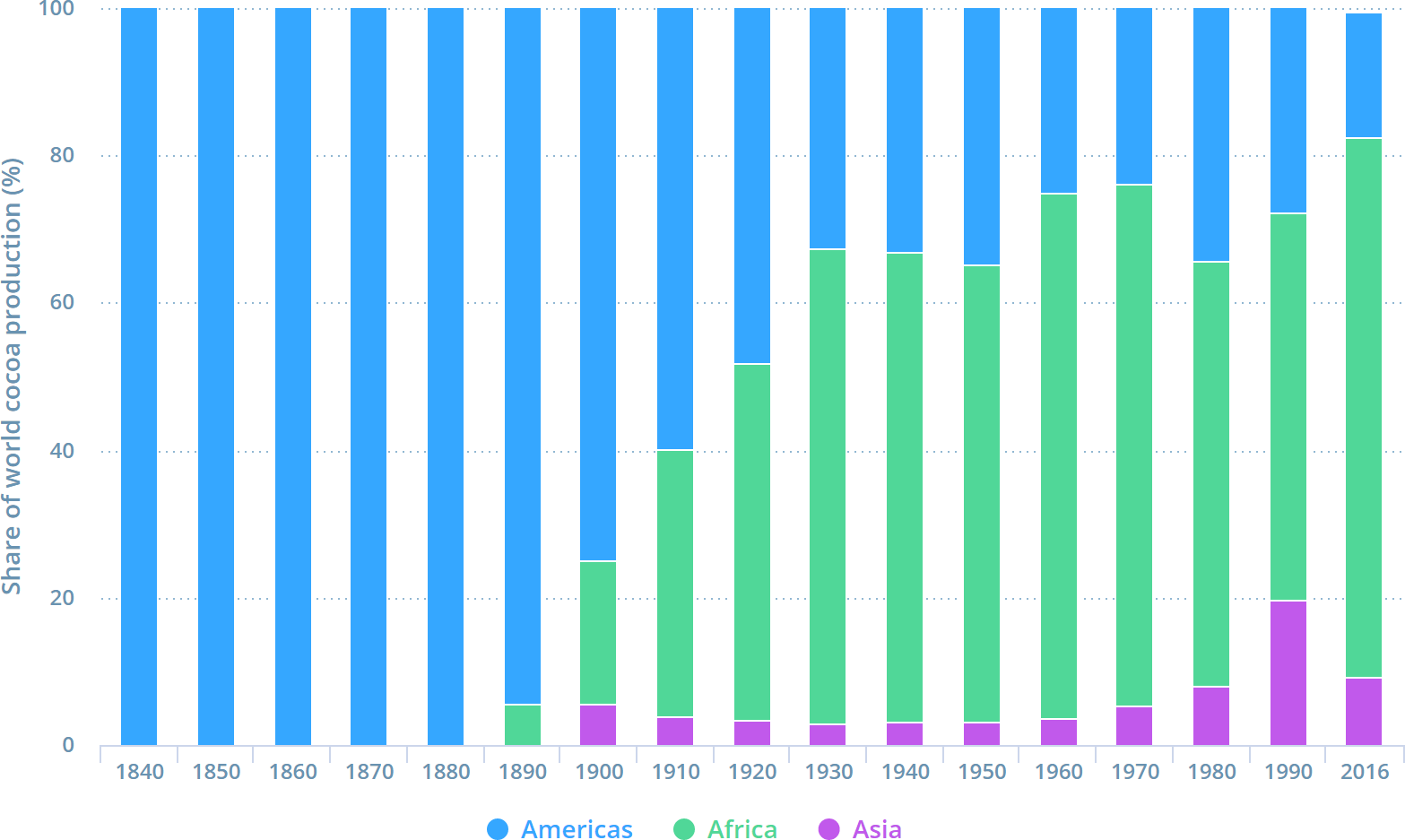 After World War II, price ceilings were lifted and economies boomed. As a result, prices shot up, quintupling to over $1000/tonne by 1947. But production growth outpaced demand, and from the mid-1950s, prices fluctuated but showed a general downward trend.

In response, in 1962, major producers—many newly independent—formed the Alliance of Cocoa Producers to fight overproduction.

Newspapers warned of a candy crunch. At first, it turned out, they had little to fear. 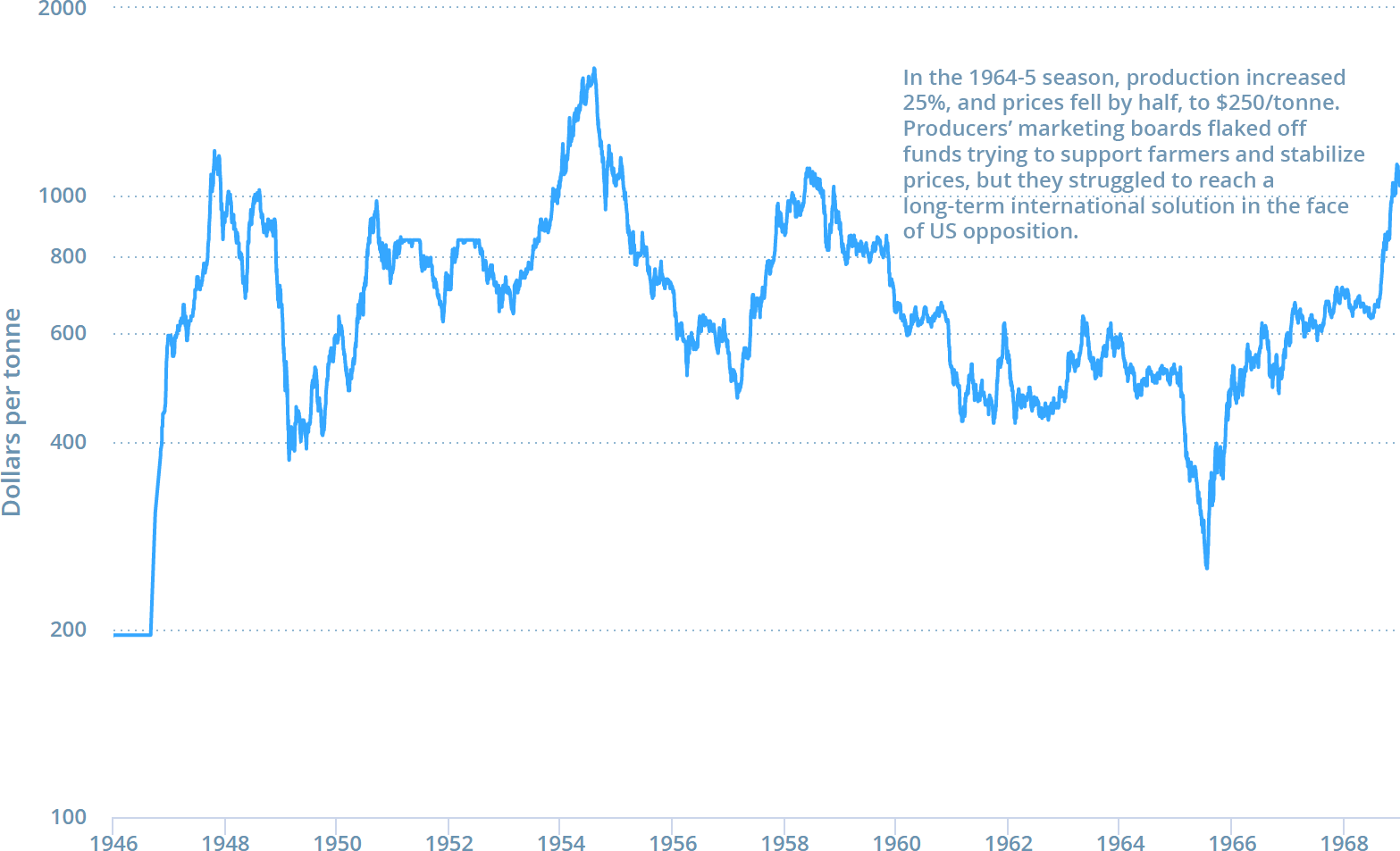 American politicians walked a fine line, since domestic and international objectives were in tension. High cocoa prices could support global economic development, but conflicted with the interests of domestic candy companies. Absent a deal, countries that depended on high cocoa prices for export earnings suffered. 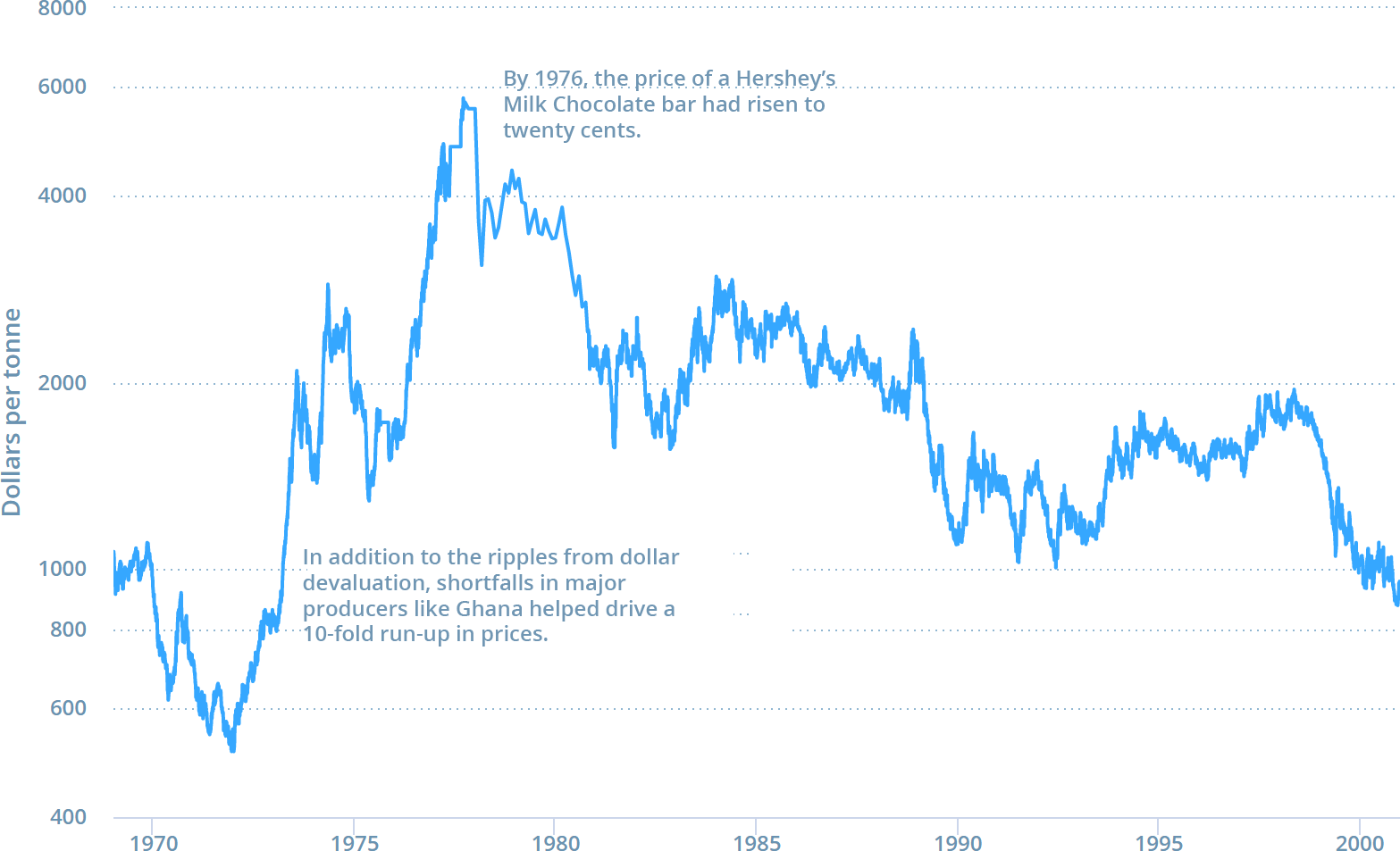 While a bounty for producers, high cocoa prices ate into kids’ pocket money. “Less than a decade ago,” the New York Times reported, “a candy-loving child on a tight allowance could budget a nickel for a daily chocolate bar. But those days have gone as the price of chocolate has steadily risen.”

After the 1977 peak, new supply helped drive prices down to under $1600/tonne, fluctuating but showing a general downward trend through 2000 as production continued to increase. Producers had managed to negotiate international cocoa agreements in the 1970s, which provided for a buffer stock to absorb excess supply. But this was of little use in a world of shortfalls and high prices. When the price did fall, the buffer stock’s funds were quickly depleted as it bought up excess cocoa, and producers struggled to support cocoa prices.

Political instability helped drive up cocoa prices at the dawn of the 21st century. In 2001, prices began to tick up as production slowed, rising from $925/tonne at the start of the year to nearly $1600 by the end. 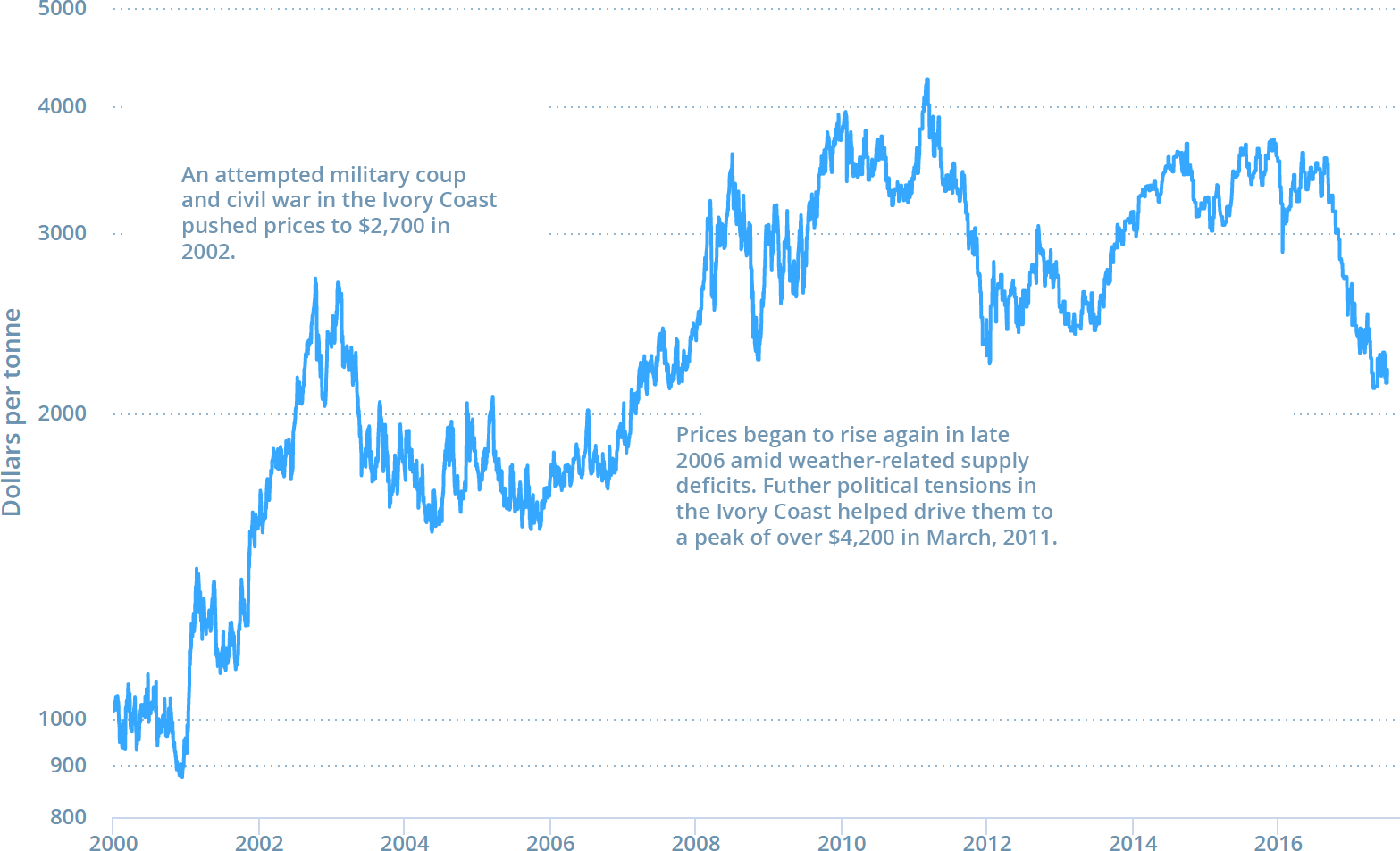 During the run-up, in 2010, one trader — dubbed “Chocolate Finger” by the media — bought a billion dollars’ worth of cocoa, 7 percent of annual production. This was enough to make two chocolate bars for every person in the world. The market went into backwardation. Outrage ensued at the apparent attempted squeeze, and many demanded greater transparency in the London market.

The recent crash in prices may owe more to longer-running developments. But as with many of the other episodes in cocoa’s history, it serves as an apt reminder: between chaotic booms and busts, this is a market that is prone to trend.