The typical Australian analogy for the China-fuelled expansion in commodities trading would probably be the mid-19th century gold rush. 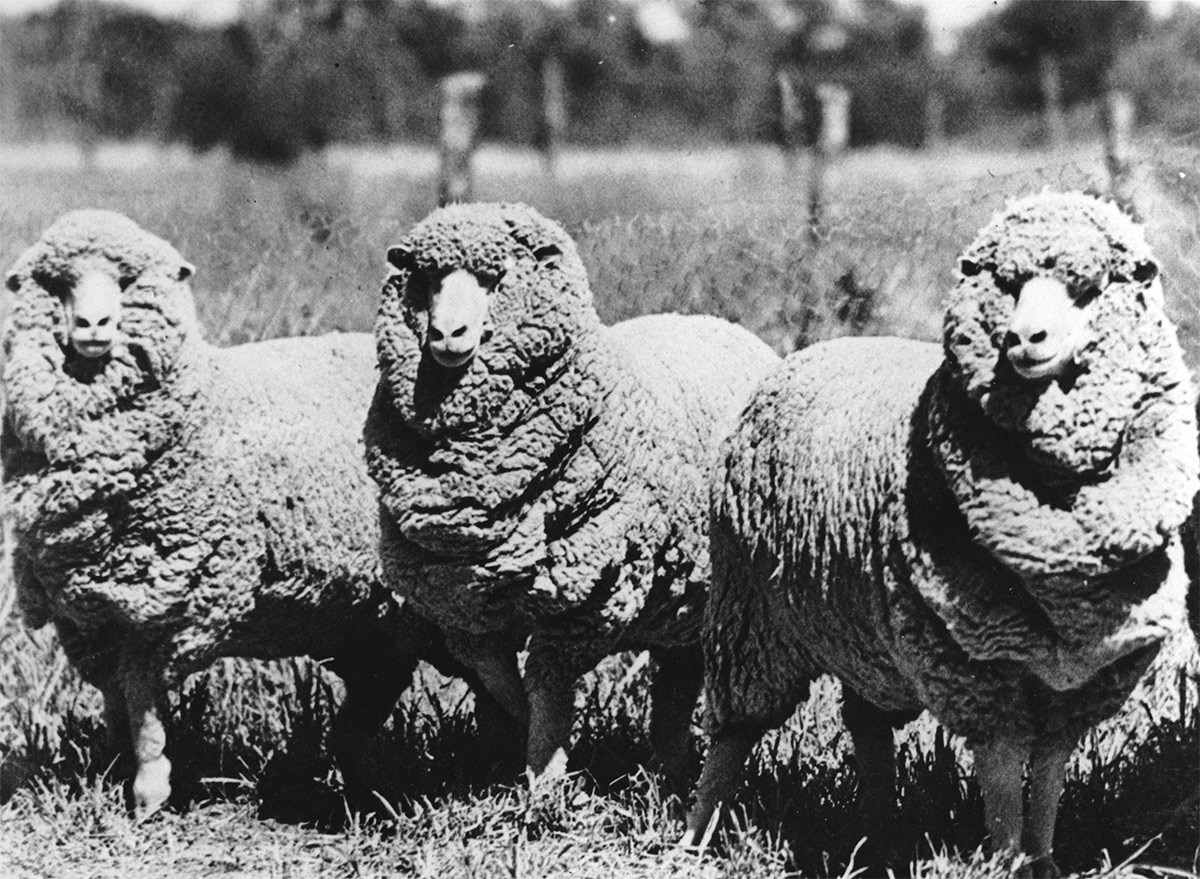 But there are many more commodities booms and busts in the mid-20th century from which to choose. From wool and uranium to nickel and diamonds, Winton brings you some of the highlights and lowlights of Australian financial markets in the post-war period.

The first great post-war Australian commodity boom was in wool. Wool had provided lucrative trade for the Australian economy since the 19th century. By 1946, it accounted for nearly 20% of the value of Australian agriculture.

The onset of the Korean War in 1950 led to large purchases of wool for American military uniforms, causing the price of the commodity to rise 150% between the start of the war and the spring of 1951. As a result of high prices, in the 1950-51 season, wool sales brought in $1.5 billion, double the previous record. Wool’s share of the value of Australia’s agriculture sector increased nearly to 60%. 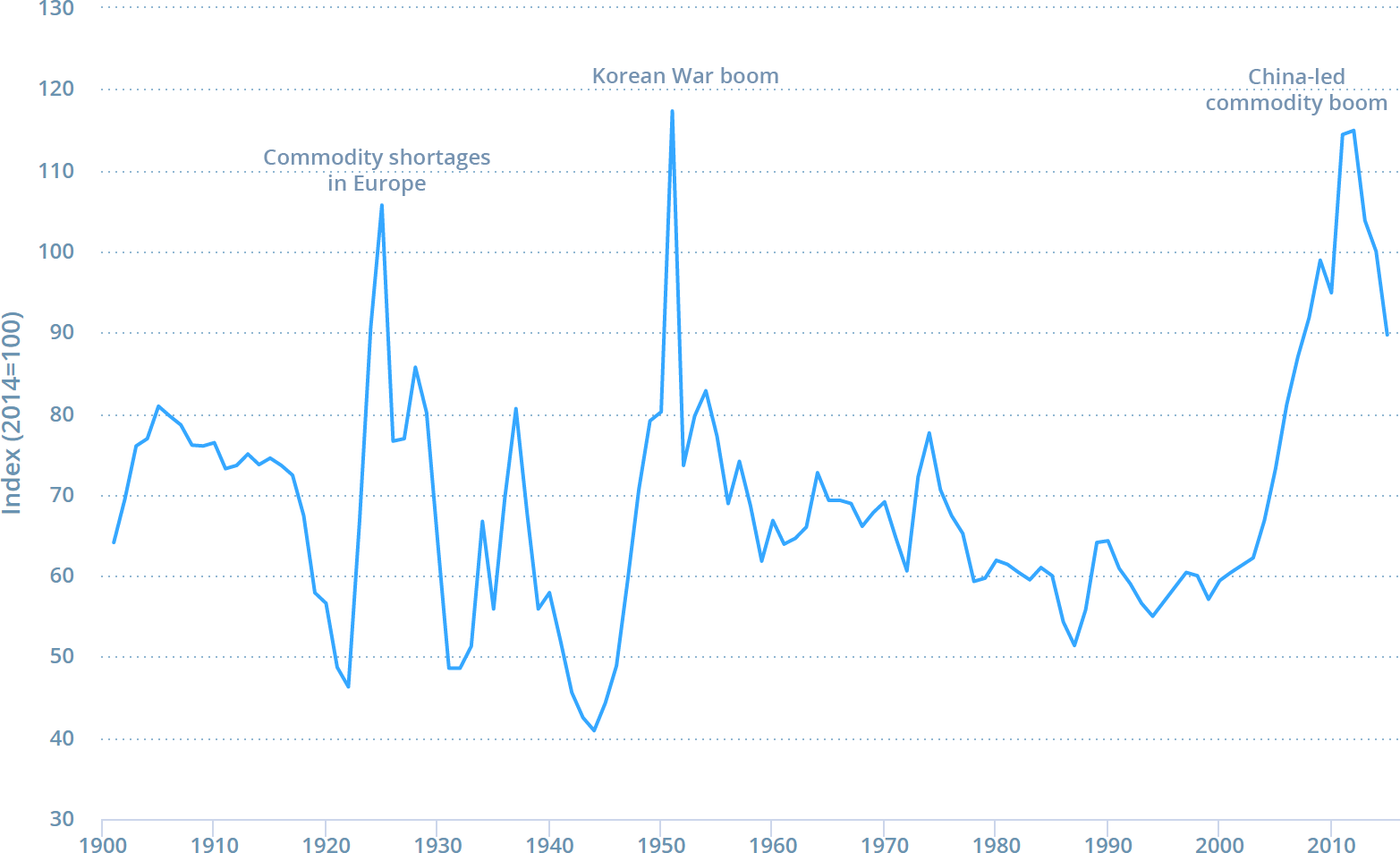 At the peak of the boom, stories abounded of newly rich farmers going on luxurious holidays and buying fancy cars. According to some reports, they even took their beloved sheep along in their new rides. “If you ever come across a brand-new Rolls-Royce with a couple of ewe lambs sitting in the richly upholstered back seat…you can be pretty sure you’re in Australia,” one foreign newspaper advised readers in 1951.

As American purchases petered out, wool prices collapsed, falling from $3.73 per pound in March 1951 to $1.35 a year later. This drove Australia’s trade balance deeply negative. In March 1952, the government took the drastic measure of imposing import restrictions. 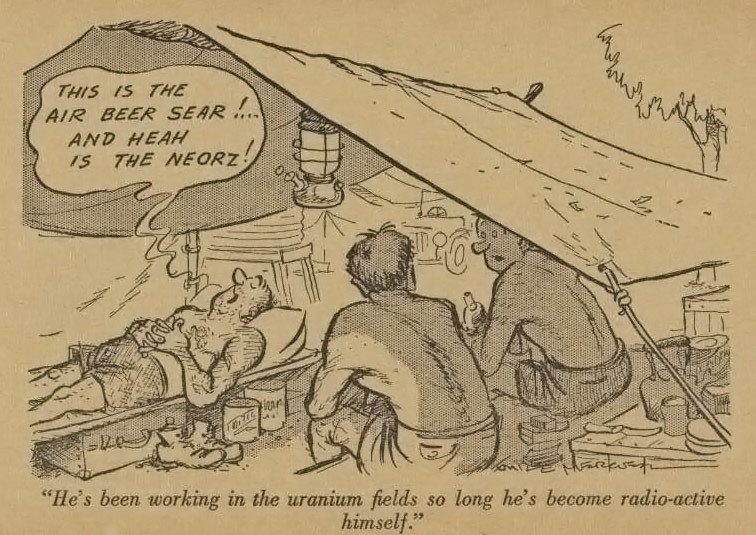 “It is the sparkle of uranium which dances before the public’s eye,” the Washington Post reported in 1954. By the mid-1950s, this explosive source of energy was fuelling a different kind of boom down under.

In 1949, a man stumbled upon a uranium deposit while hunting for kangaroo. Discoveries like that launched armies of prospectors. In 1954, two friends chanced upon another major deposit. The lease for their find went for more than $1,000,000. One of the discoverers was hospitalised with a heart attack, overwhelmed by the sales negotiations.

With news of discoveries radiating outwards, Australians went wild speculating on uranium stocks. According to one newspaper, “[e]ach new report of uranium…discoveries sends share prices soaring to new heights….Gambling on the stock exchange is threatening to usurp betting on the horses as the nation’s spare-time occupation”. 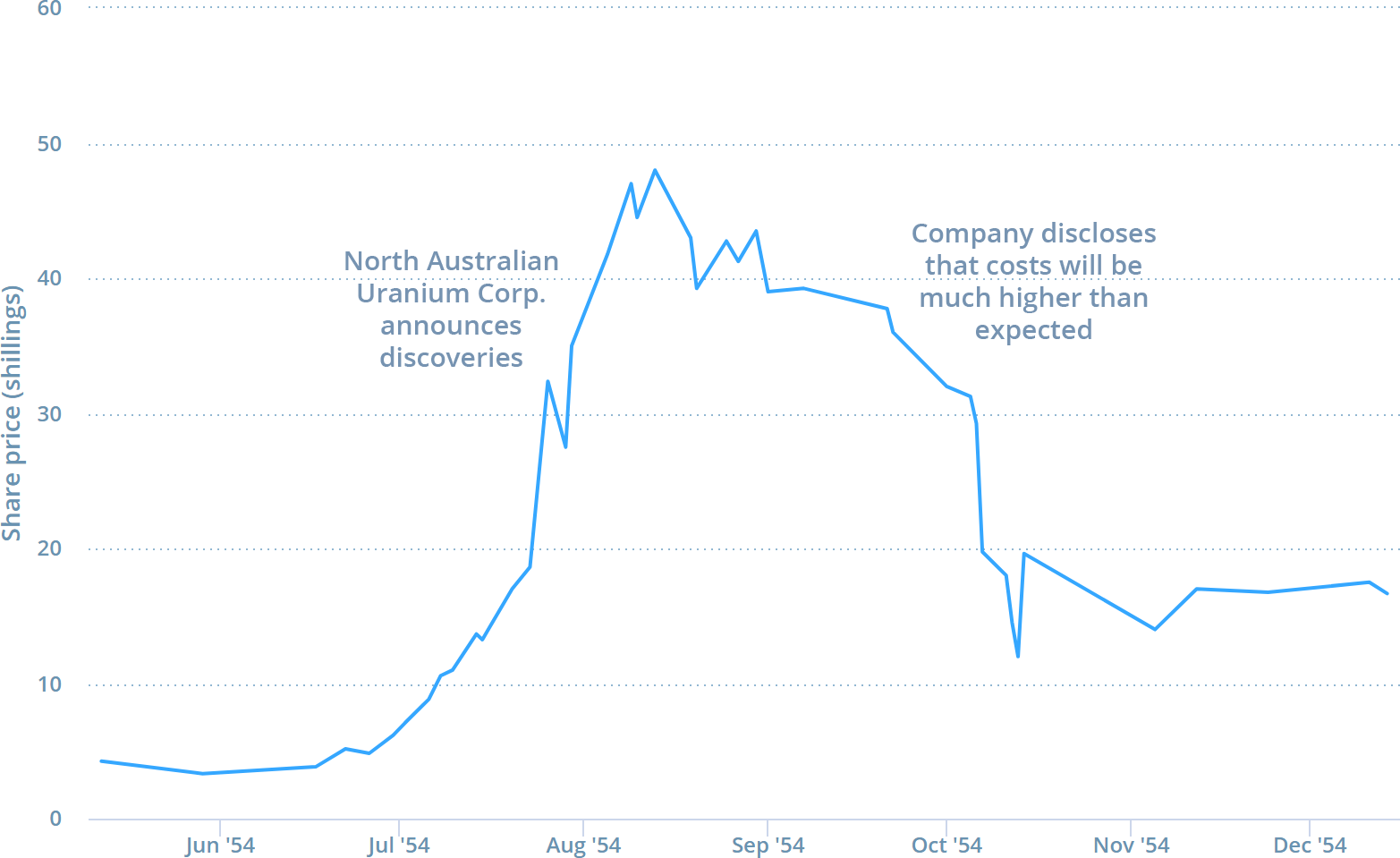 The most hyped of the uranium stocks was the North Australian Uranium Corporation, whose shares became known as “Norks, because the correct name…takes so long to say that a bargain might be missed in speedy bidding,” according to the Brisbane Telegraph. Issued at 5 shillings in early 1954, Norks hit 50 shillings by August.

But when the anticipated costs of the company’s ventures became known in October, the stock crashed to a quarter of its peak. This coincided with a broader downturn in the frothy market for uranium and oil shares. “Many Australian small investors face the loss of their automobiles, homes and life savings,” one newspaper thundered.

Uranium was not the only element prospectors were chasing in this period; another was nickel. In the 1950s and 1960s, Australia saw a broader mining boom, with mining shares increasing 25% annually. Most of this growth came from heavy metals other than nickel. Although it was always thought that Australia had large nickel deposits, few had ever been found. By 1969, most of the world’s nickel supply still came from Canada, and the price had shot up thanks to industrial action and war demand.

In September of that year, an obscure Australian mining outfit, Poseidon, claimed it had discovered a major nickel deposit. The share price rose 1500% in a few days, peaking at A$280 in February. This left Poseidon’s value at more than a third of that of mining behemoth BHP. 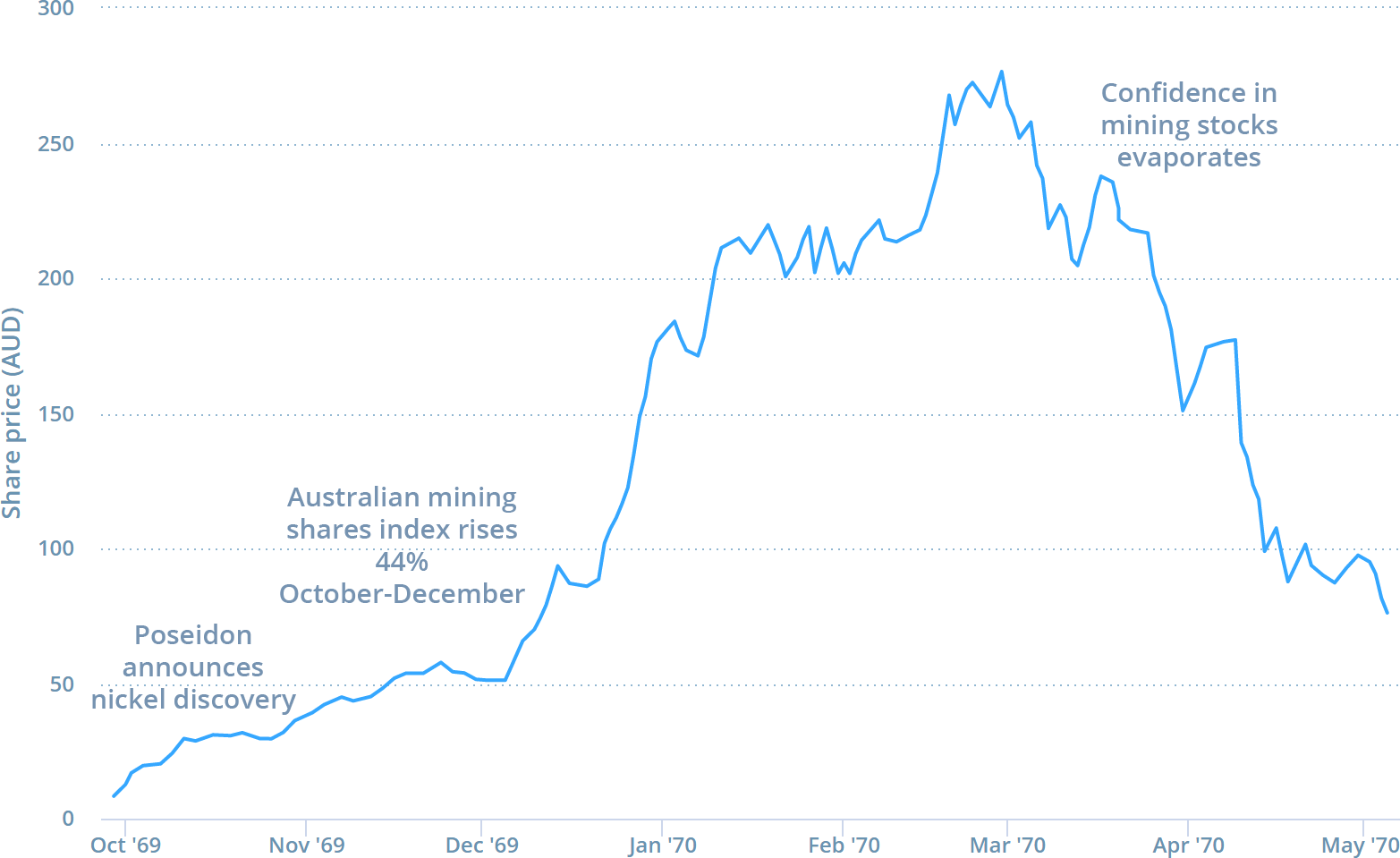 Outsiders sought to cash in on the hype surrounding Poseidon. Seat prices at the Sydney Stock Exchange crossed A$87,000, up from under A$20,000 a few years earlier. One mining company, Tasminex, allowed rumours that it had found nickel to spread. When this pushed up the shares, the company’s chairman sold out. Nothing more was ever heard of Tasminex or its nickel.

Investor doubt quickly set in. Nickel prices fell, and extraction prices proved high while ore grades were disappointingly low. In 1974, Poseidon began mining the site that had set off the mania, but output was so low that it was soon delisted from the exchange.

As diamond prices soared in the late 1970s, a frenzy of prospecting gripped Australia. Competition between mining companies was fierce. Spying was rampant, and organisations went so far as to hover their helicopters above their rivals’ to keep them grounded and slow their explorations.

Amid the rush, diamond fever swept the stock market. As North West Mining’s managing director put it, “the people who are buying the shares aren’t buying them because they think we’ll find diamonds. They’re buying them because when the next big rumour comes around, they hope they’ll be able to sell them to somebody else at a higher price”. Between 1978 and 1980, the share price of Northern Mining increased almost 13 times, while Cozinc Riotinto of Australia’s more than tripled. Ashton Mining’s share price rose 236% between the end of 1978 and late 1980. All these companies had connections to the promising Argyle deposit. 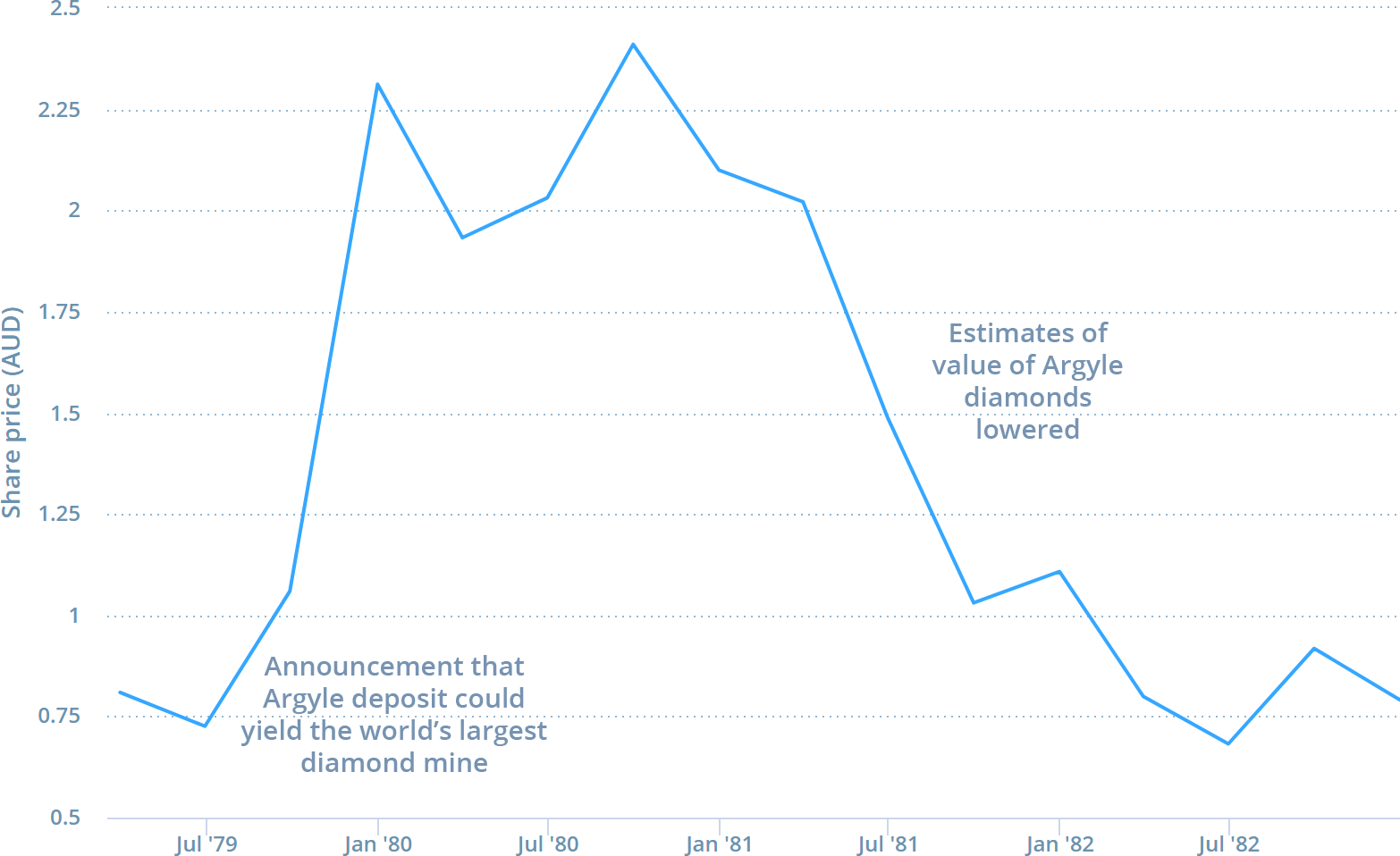 In 1981, the diamond market cracked. The US, a major source of demand, had entered a recession; the diamond cartel was flooding the market to punish Zaire, which had defected; and Australia threatened to add 50% to world output. By 1982, the diamond cartel’s sales revenue had fallen by half, and Ashton shares had fallen to less than a third of their highs.

The Argyle mine came online in 1983 but was less disruptive than some feared, adding only 5% to the value of world output by 1987. Diamonds may be forever, but the manias they inspire come and go.