The gas market has experienced many shocks stretching back into the 19th century.

One notable aspect of the current diplomatic tensions between Qatar and its Arab neighbours has been the relative poise of natural gas spot prices. The Gulf state accounts for a third of LNG exports, and LNG in turn makes up approximately a third of total international trade in natural gas. It is early days, however, particularly as commodities traders have been sufficiently concerned to route LNG cargoes around Africa rather than through the Suez Canal, and to charter smaller ships to mitigate the impact of potential holdups.

Previous market disruptions include faulty pipelines in 19th century Pittsburgh, the machinations of energy companies like Enron in the early 2000s, and natural disasters like Hurricane Katrina in 2005. In the aftermath of Katrina, natural gas prices doubled. There has been a combination of infrastructure investments, source diversification and new legislation during the market’s existence. But a cursory glance at the range of prices over the last 10 years suggests the current stasis may not last for long. 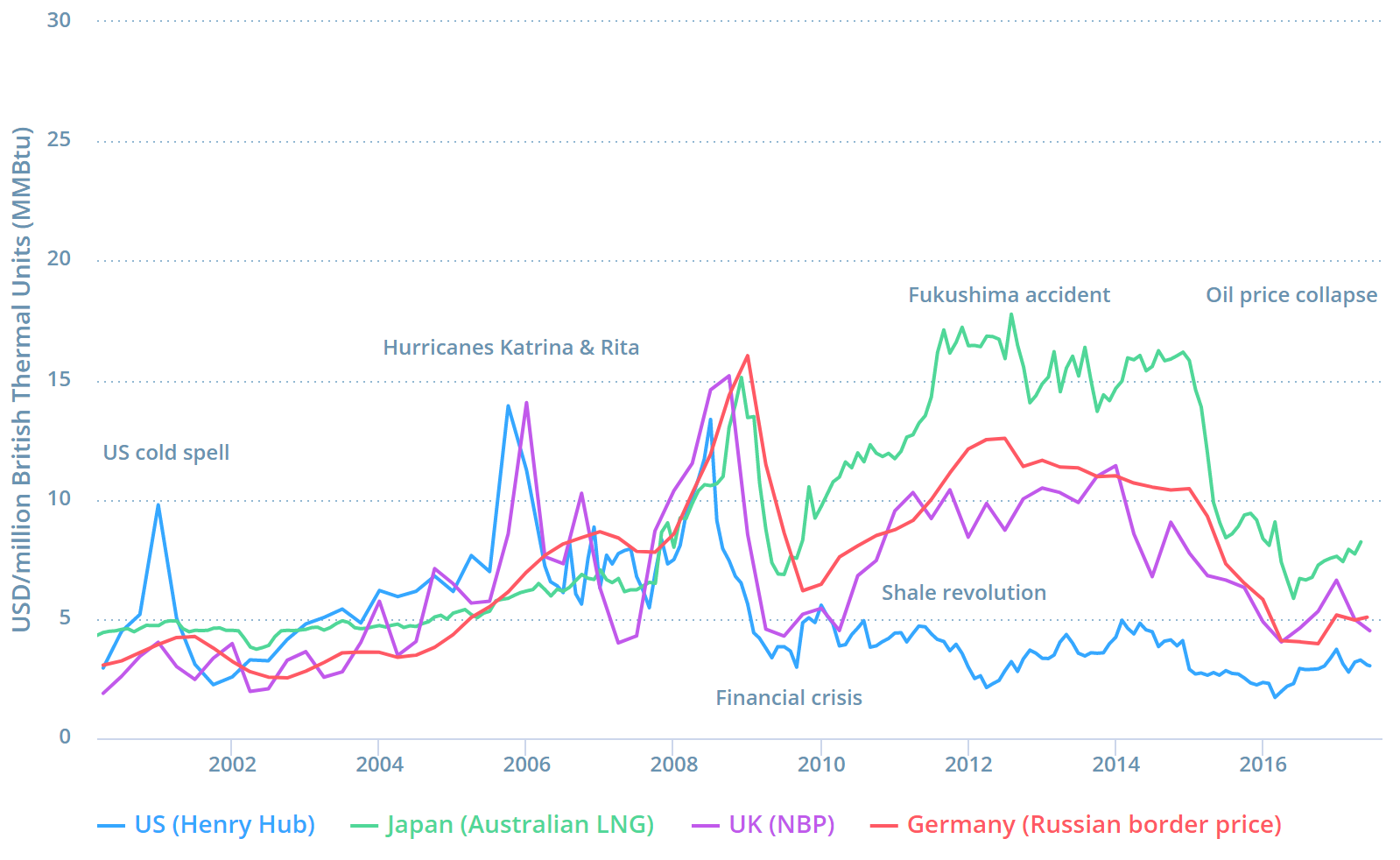 In the early days of natural gas, rudimentary pipeline technology caused frequent disruptions. By virtue of its proximity to the Alleghany gas fields and motivated by a desire to reduce its air pollution, Pittsburgh was the first major city to adopt natural gas on a large scale. But its pipelines were beset by constant leaks, fluctuating pressures and explosions. One explosion levelled an entire city block, sparking a riot. Such unreliable supply prompted a partial return to coal, but also brought about innovative safety features and the auxiliary production of coal-oven gas, which helped smooth supply and demand for natural gas.

Ill-conceived legislation has sometimes hampered supply. Following the 1954 Phillips Decision, federal controls imposed on the US interstate gas market kept interstate prices far below their market value, fuelling demand while discouraging drilling and exploration. This led to chronic shortages in non-producer regions. By the mid-1970s, thousands of schools and factories had to close for want of gas. Meanwhile, intrastate markets in producer regions were well supplied and highly lucrative, leading to far faster development of local distribution networks. The interstate shortages also expedited the development of LNG import facilities along the East Coast, ultimately allowing the United States to avoid a supply crunch during the booming 1990s.

When El Paso and its affiliates withheld natural gas to California during the state’s power crisis in 2000, they drove Southern Californian gas prices to five times the levels seen elsewhere, increasing the differential in prices along the pipeline from $1 to $50. Californian officials estimated that El Paso’s actions drove California’s gas and power costs higher by $3.7bn. Together with energy company Enron’s malfeasance, El Paso’s actions highlighted the dangers of overzealous energy deregulation, resulting in greater levels of regulatory oversight. 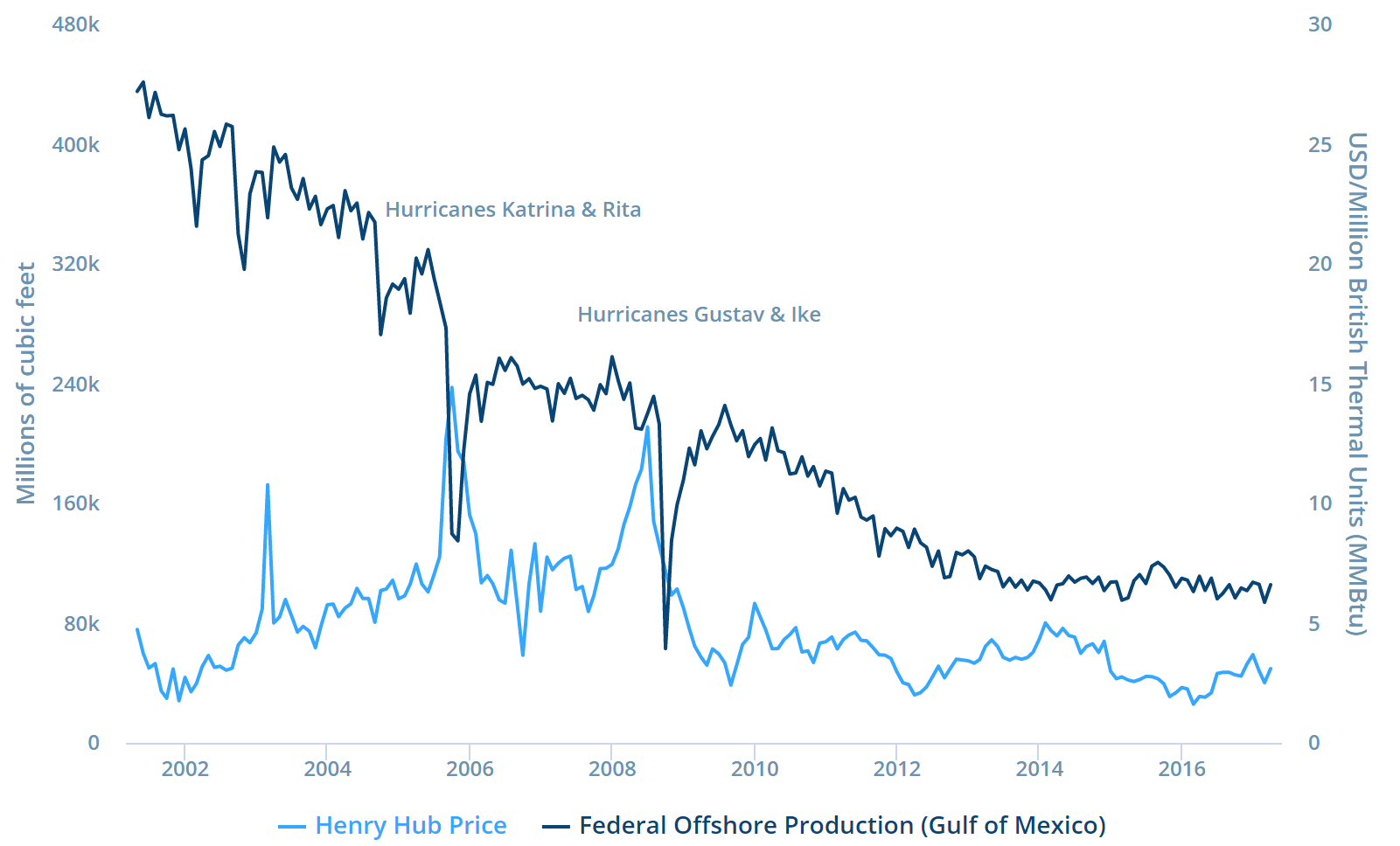 Extreme weather has the capacity to knock out supply. In 2005, Hurricanes Katrina and Rita severely damaged offshore gas production in the Gulf of Mexico. From 10 billion cubic feet per day in May – 22% of national production - output had crashed to 4.3 billion cubic feet by October, causing Henry Hub prices to surge. The Gulf fields never recovered – just when they were clawing their way back, Hurricanes Gustav and Ike in 2008 shrunk production to the lowest level in decades.

With its heavy reliance on piped Russian gas, Europe has long been susceptible to politically motivated supply shocks. In January 2006, Gazprom cut off Ukraine in a payment dispute, forcing Ukraine to siphon off supplies destined for other European countries. This caused widespread shortages further downstream. The dispute flared up again in 2009: supplies were cut, with serious humanitarian consequences for southeastern European countries. 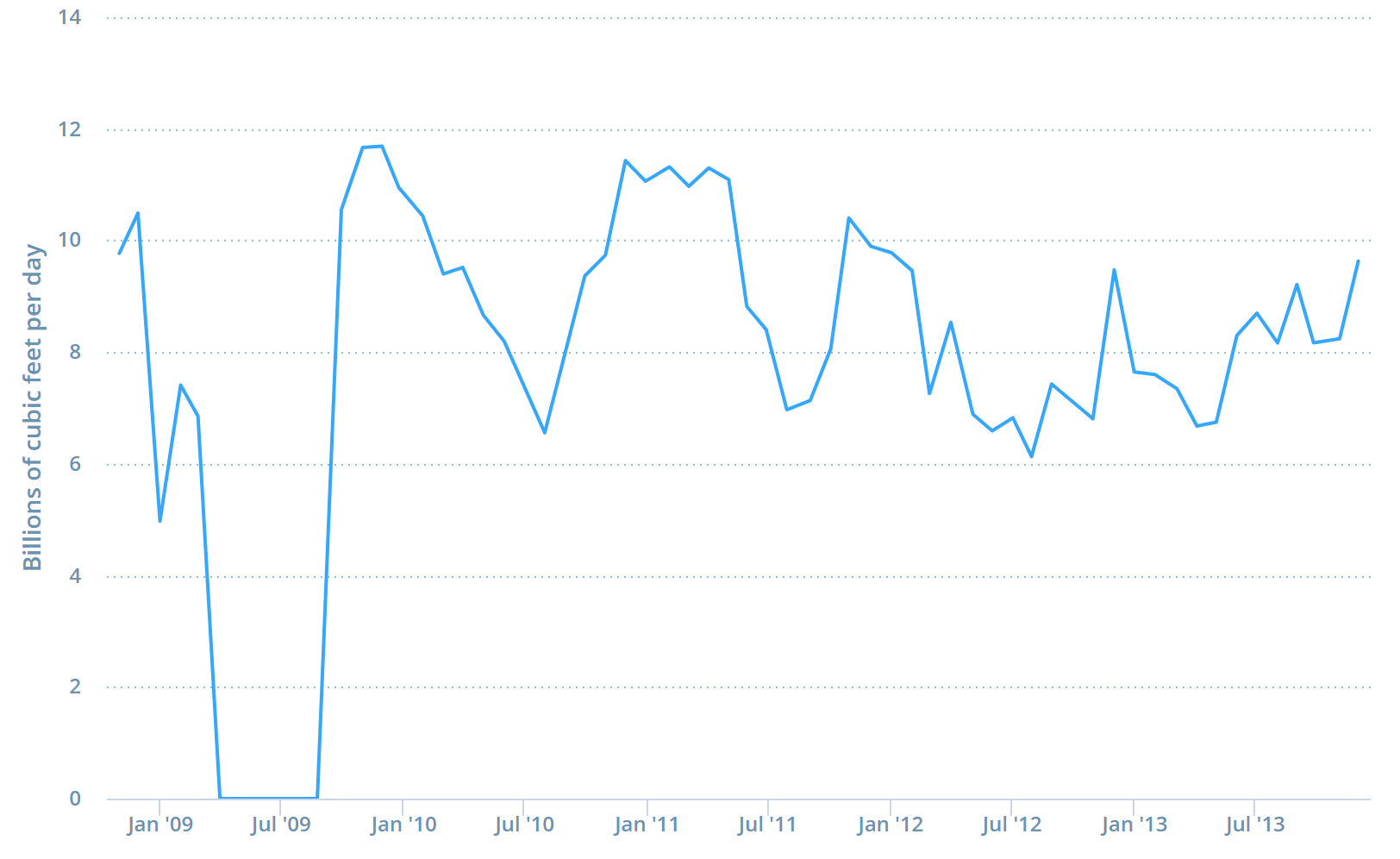 Both crises reinforced Europe’s desire to diversify away from Russian gas. European consumers developed LNG import hubs, interconnectors, and storage facilities. They even went so far as to ban combined ownership and operation by the same entity of pipelines in the EU.

Following the Fukushima nuclear accident in March 2011, Japan shut down most of its nuclear reactors and turned to the short-term LNG market to fill the void. By 2012, Japanese LNG imports were up by 18% and Asian LNG prices had doubled. This reduced the availability of LNG in Europe since many shipments originally destined for the continent were diverted to Japan.

Thanks to these strains, the accident served to improve the market’s long-term resilience. It sped investment into new LNG projects, with many of these bearing fruit now, creating additional slack to deal with future supply and demand shocks. 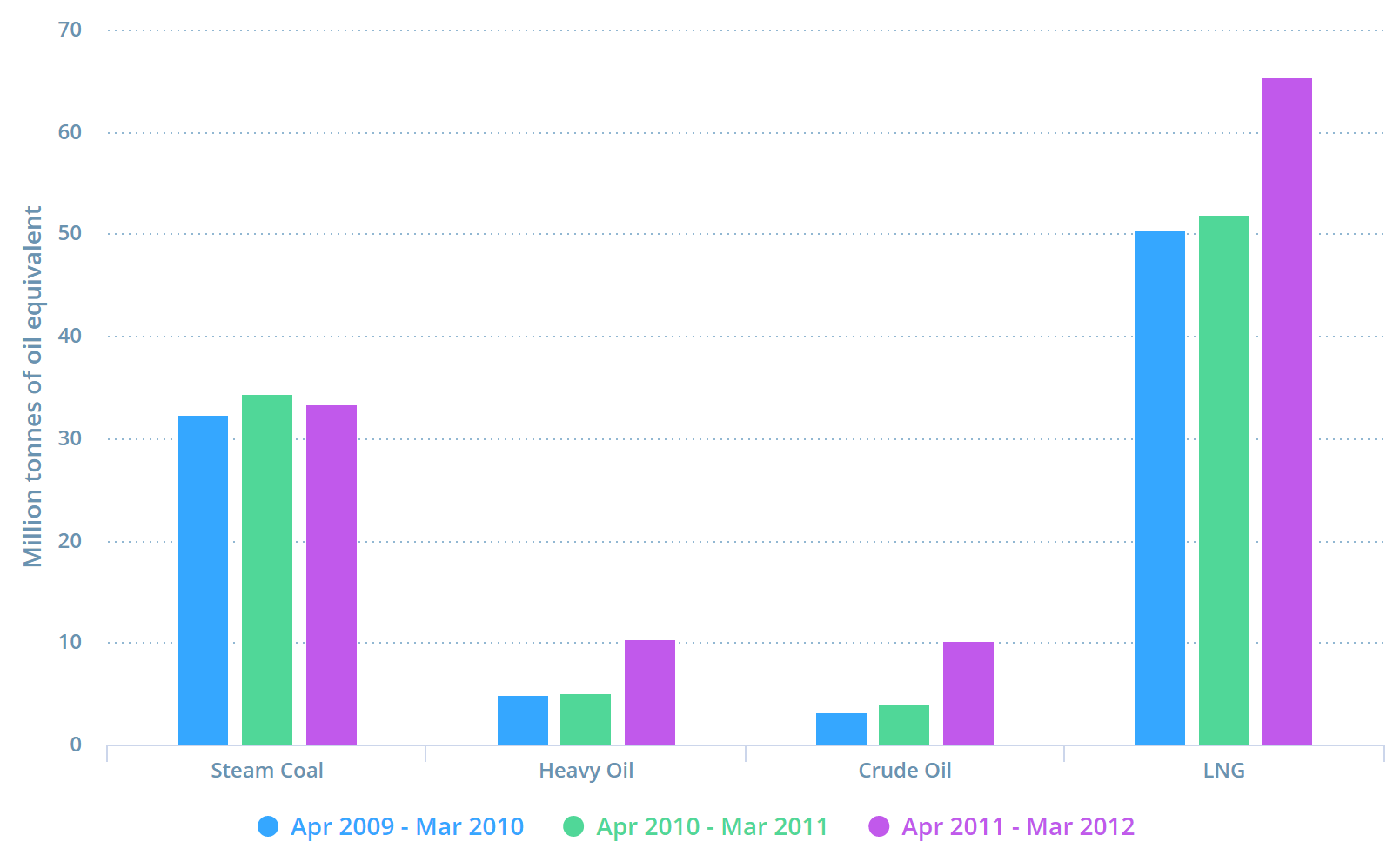 The Mirage of a Steady-State Gas Market

As these incidents show, producers and consumers have suffered several price shocks even as market dynamics have evolved. Global storage levels are now at an all-time high, and large-scale projects commissioned by Australia and Indonesia in the wake of Fukushima are now coming online, adding to capacity. 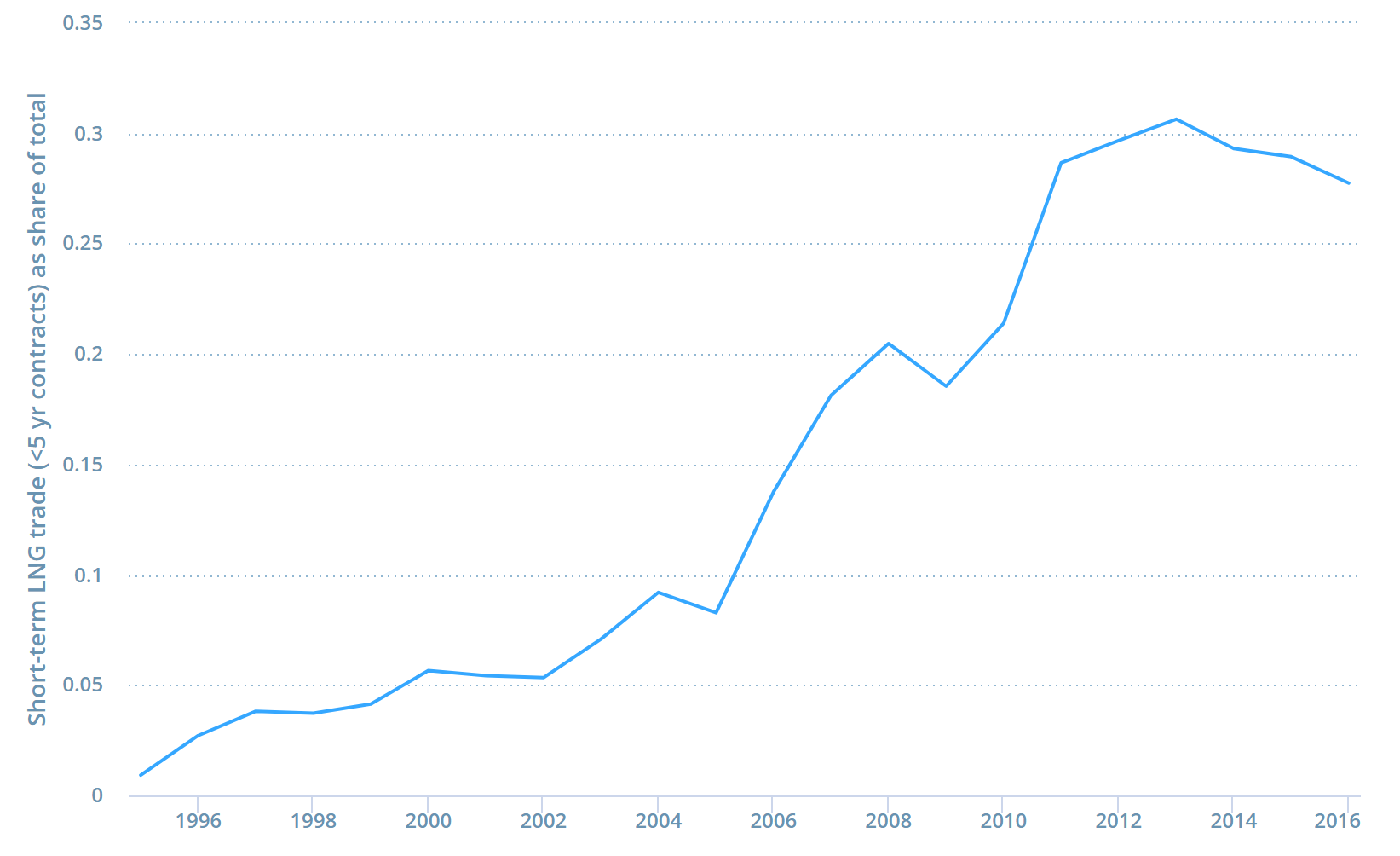 More importantly, the United States’ shale revolution has created a surplus of gas that can now be exported to Europe and Asia as cheaply as Qatari LNG, and gas contracts have become increasingly flexible.

These factors appear to be cushioning the short-term impact from the economic blockade of Qatar by other Arab states. Whether this holds over the long term remains to be seen. The historical record cautions against assuming the market can flawlessly process these complex, ever-changing dynamics of supply and demand.