Why not give your nearest and dearest the gift of a classic financial market boardgame? Here we present 10 ideas from the Winton archive.

Winton's historical archive contains 114 financial market games that require a mix of skill and luck reminiscent of real-world investment. Some are almost 100 years old, and all say something about the intellectual fashions of the era in which they were launched.

Monopoly, probably the most famous board game, is itself such a game, focusing as it does on real estate investment. While Winton owns several versions, including the Berkshire Hathaway Diamond Edition, we have chosen instead to focus on lesser known games.

From the selection below, there are games released at the height of stock market booms, in both 1929 (Ticker) and 2000 (Contango). Others, like 1975's The Beat Inflation Strategy Game, reflect contemporary changes in global economic conditions. Hostile Takeover (1987), meanwhile, epitomises the mergers and acquisition boom of the 1980s. More recently, Bailout (2009) provides a blackly humorous take on the global financial crisis.

Some of the salient features shared by several of the games include the ability to trade on inside information, the prospect of regular market disruption and the importance of knowing when the odds are stacked in your favour.

A game of luck and skill that might have been designed by Gordon Gekko himself. Hostile Takeover was launched in the middle of the 1980s, the decade when big-ticket corporate mergers became all the rage, as depicted in Barbarians at the Gate, the breathless account of the leveraged takeover of RJR Nabisco. Channel your inner Carl Icahn or Jimmy Goldsmith, and build an industrial conglomerate that makes a mockery of antitrust provisions.

One player acts as the auditor and must keep tally of the market values of the various companies. Stock prices change according to the various cards drawn.

Players can attempt to buy companies using either cash or bank loans, but may face resistance from other opponents who own the stock. By way of example, targets are able to thwart predators’ advances by playing a “random walk card”.

Features:
Hostile Takeover includes a lively potted history of corporate mergers and acquisition from its beginnings in 1974, when Canadian nickel producer INCO bought US battery maker ESB, up until 1987.

It is also replete with the evocative jargon of M&A. All of the following – and more - are in evidence: shark repellent, poison pills, the scorched earth defence, the crowned jewel defence. 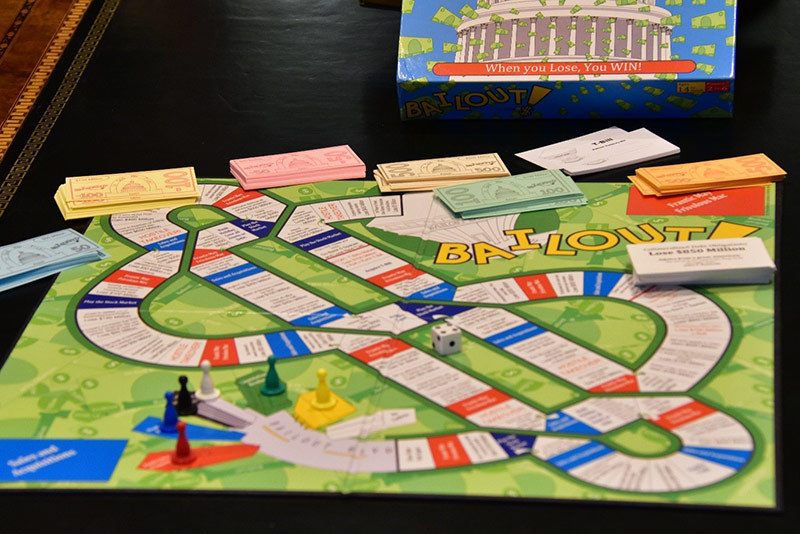 In this - the 10th anniversary of the global financial crisis - why not re-live the drama of the era by playing Bailout, a game in which the usual rules of finance are turned upside down – much as they were as the US subprime mortgage market started to sour in the summer of 2007.

Rules:
Age: 14+; 2-6 players. Each player is the Chief Financial Officer of a US bank. The aim is to preside over the institution with the largest debt pile when all players have reached the BAILOUT square, thus securing the right to be bailed out by the government.

Features:
Choose to be one of the following six US banks:

When players land on the BANK STRESS TEST space, they must disclose to every other player the details of their banks’ balance sheet.

Stopping on the Bank Holiday square forces players to transfer all of their banks’ debt to the BAILOUT banker (i.e. the government).

When players land on the Frantic May and Frivolous Mac spaces, they draw a card that adds a specified amount of losses to their overall exposures from mortgage-backed securities and collateralised debt obligations.

“Important strategy advice: pay attention to all of the other players’ assets and debts during the game.”

Published as the market seemed to be reaching a “permanently high plateau”, in the words of an eminent economist of the time, Ticker let players “trade in stocks just as in a Broker’s Office in Wall Street or elsewhere”, encouraging them to develop their own trading systems and familiarise themselves with the finer points of short selling and margin calls. However, the game did not exaggerate potential windfalls, explaining that “chance plus judgment determine the results”.

During a trading session, “customers” each select one stock from a generic list including “American Railroad” and “National Equipment Corp”. They take turns rolling dice to determine their stock’s fluctuations and trade it with the “broker” accordingly.

Features:
If the price of a player’s stock falls below a certain level, she or he receives a margin call and must pay the broker $10.00 per share. Players can protect their stock from declines by purchasing a stop-loss order, and force its price down by paying for a bear raid.

The game stressed the diversity of strategies available to players: “They may be conservative or ‘plunge’.” Little did its authors foresee, or so it seems, the actual US stock market plunge that was imminent. 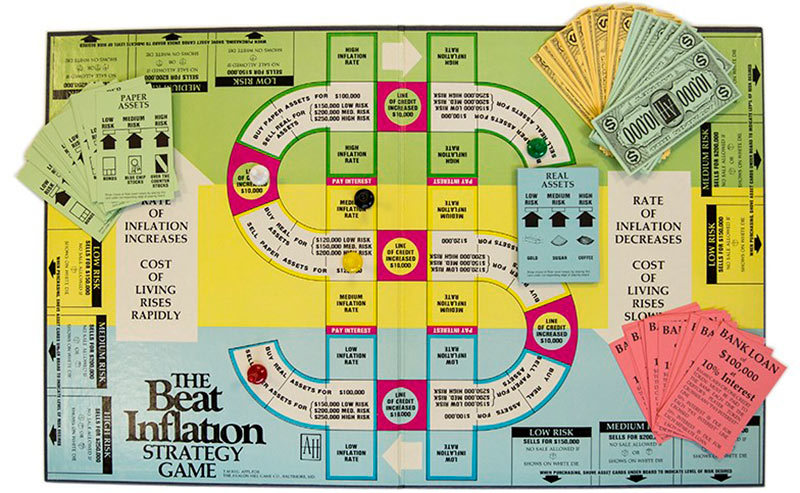 Recapture the spirit of the turbulent 1970s in this spellbinding stagflation simulator from Avalon Hill Games. As commodity prices reached all-time highs, The Beat Inflation Strategy Game taught players how to make money by investing in a world with accelerating inflation. At the same time, it offered a polemical call for a shift in economic policy: “The brakes exist. Inflation could be stopped. The reason it will not be stopped is a political reason.”

This was as much a promotion for an investment strategy book as it was a game. As the rulebook stated, “As a bonus for those players who are interested in investments, the game illustrates two basic and realistic points: 1. Inflation is here to stay; 2. New investment tactics have been developed to deal with permanent inflation. These new investment tactics are explained fully in the book”—The Beat Inflation Strategy, available in hardback for $7.95 from Simon and Schuster. 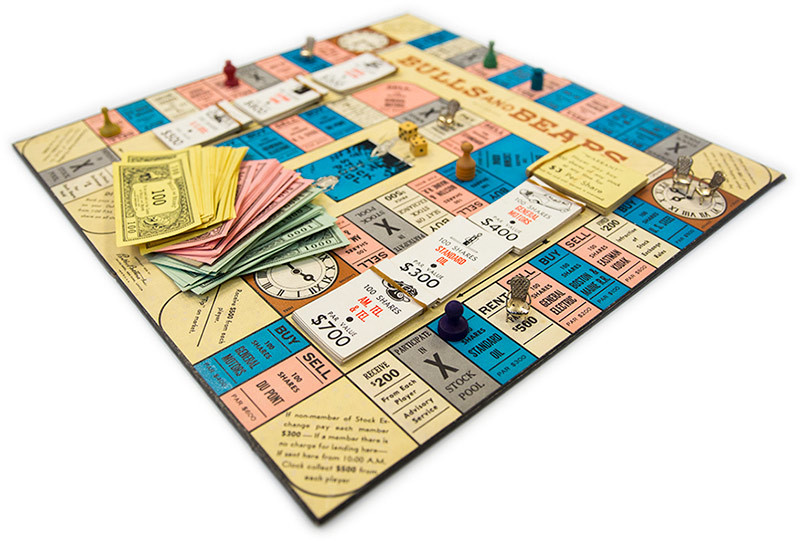 More sober than 1929’s wide-eyed Ticker, Bulls and Bears, coming 7 years after the Wall Street crash, had players starting with half the cash that its spiritual predecessor specified. The game’s cover misleadingly suggested that its author, Charles B. Darrow, had invented Monopoly on his own — and ironically, since Parker Brothers was at the time forced to buy out its original creator’s patent to acquire a monopoly on the game.

Players move around the board and must buy or sell a given stock in accordance with the spaces they land on, at a price determined by a roll of the dice.

Features:
If players accumulate enough of a stock, they gain a corner, which entitles them to payments when others land on the stock’s spaces. Unlike many other stock market board games, Bulls and Bears players buy and sell fake equities of real companies, including Eastman Kodak, General Electric, Du Pont and Standard Oil.

“Set in a time of financial chaos, when the general public have lost faith in the Bank’s ability to safely house their deposits and are withdrawing their money and transferring it to their mattresses”, Market Meltdown dramatises the anxiety about high finance endemic in the post-crisis era. Acting as traders, players are under pressure to borrow heavily, make increasingly large bets with other people’s money and “go rogue” to cover up disastrous losses.

Players are represented by private jet figurines. As they move around the board, they must make ever-increasing payments to their depositors while gambling on the stock market, which takes the form of a roulette wheel.

Features:
Participants can amass data, which tips the stock market (roulette) odds in their favour. But landing on a “Data Wipe” square vaporises that advantage. Landing on an arbitrage square allows investors to make a riskless bet, while the Financial Regulator square can result in fines. Players can also earn a Banker’s Bonus for “good behaviour” by landing on the right space. But “banking is not all skill!” as the rulebook explains. Landing on the Luck square can thus improve a player’s lot. 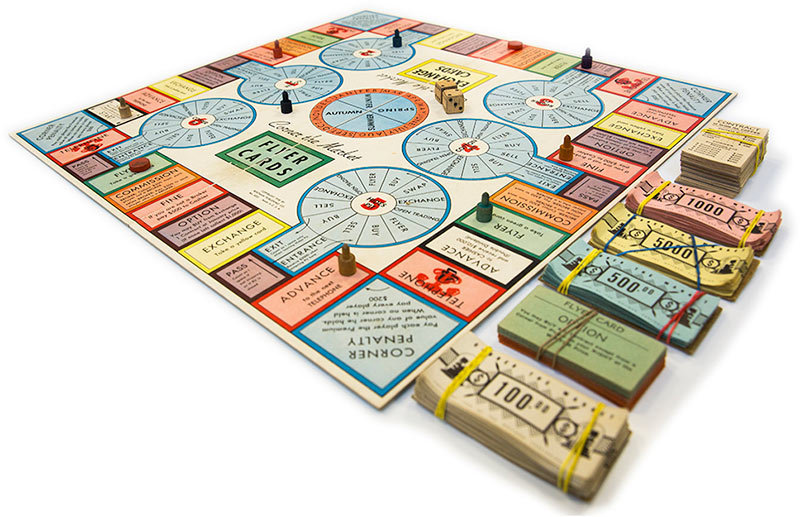 Ever wondered what the commodities markets of Chicago were like long before the electronic trading revolution depersonalised the act of buying and selling? Corner the Market gives a flavour of a bygone era, with players having recourse only to pit trading and the occasional telephone broker. Come for the beautifully designed board; stay for the chance to brandish contracts and holler at your opponents.

Seasons only change when a player throws a double one or a double two.

In order to buy and sell contracts, players need to enter one of the six pits corresponding to each of the tradable commodities.

Features:
If players draw a broker seat card, they are entitled to charge commission to players that land on broker seat squares. 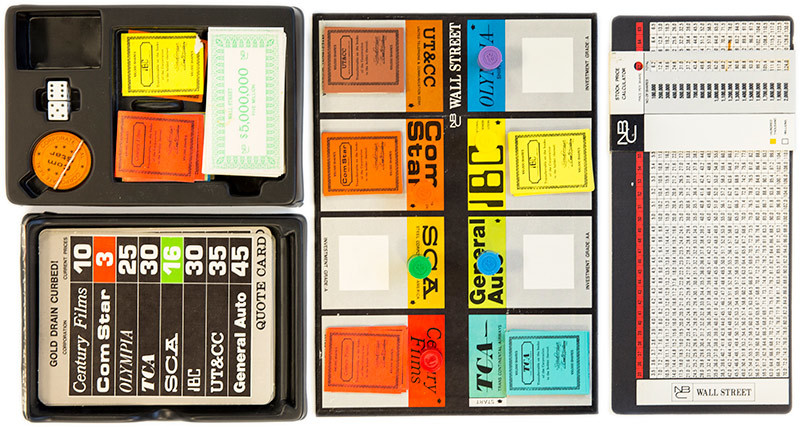 Often overlooked in financial history, the 1960s had stock crazes of its own, with investors piling into mutual funds, conglomerates and high-tech-sounding stocks. Published by NBC and Hasbro at the tail-end of the decade, The World of Wall Street helped players “learn the pros and cons of owning glamour issues, growth stocks and blue chips”, just as the “go-go” spirit was fading.

Investors may choose to buy or sell the stock of the space they land on each turn. If they own more than half of a corporation’s shares, they have a controlling interest, which lets them sell shares of the stock at will.

Features:
Stock prices change according to a quote card drawn at the start of each round. These correspond to events including “Gold drain curbed!”, “Test ban treaty signed!”, “Man on the moon!”, “Consumer income at all-time high!” and “Supersonic transport approved!” The World of Wall Street also came with a handy stock price calculator to help players figure out how much a block of stock cost.

A game launched amid the tech market bubble of the early 2000s, Contango reflects the stock-picking frenzy of its time. Its name is thus a slight misnomer: while players are occasionally able to secure investments in alternative assets such as commodities, this contest is really all about equities and the intriguing quirks of the stock market.

Landing on a company’s square enables players to buy its stock. Drawing stock market cards can push the value of a player’s portfolio up or down, and they include: “Random Walk” cards, where the value of a stock rises for “no reason”; and the Super Bowl Effect card, which adds value to a portfolio given the tendency of the stock market to rise after an NFC team wins.

Features:
Players have the option of paying $100,000 for an insider trading certificate, though they must “get set for corporate intrigue and a giddy ride”. The instructions to the game go on: “Insider trading… illegal but exciting!” However, a note at the end does stress that “in reality, stock price manipulation is illegal and can result in serious consequences”. 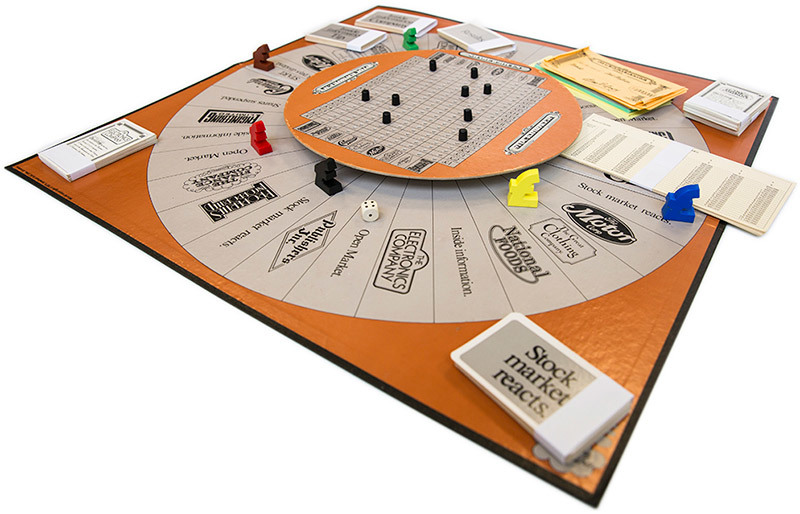 A British board game that may somewhat overegg the abilities of those working in the stockbroking profession in the 1970s, Stockbroker nonetheless requires of its players a certain degree of mental arithmetic.

The game is based on trading in blocks of shares in nine companies. Each company has 1.1 million shares, with 11 blocks of 100,000 thus available for trading.

All share prices are initially pegged at £1 apiece, and can rise to possible maximum of £21 each.

Features:
The share prices of the various companies are recorded on a separate board with movable pegs.