What history tells us about trend following in inflationary environments.

Inflation has returned after more than a decade of near-zero borrowing costs and extraordinary monetary and fiscal policy across most of the world’s major economies. Investors have been asking us about the prospects for our strategies in such an environment, particularly trend following, which has been touted as a beneficiary in various studies and marketing documents. Readers of our quarterly updates will note that trend following on commodities has been a notable driver of our performance over the past 18 months, coinciding with a runup in US inflation to its highest level in four decades.

We have, over the years, built a database of prices for the markets we trade, often going much further back in time than the price histories typically available from data vendors. While this historical data is not a direct input to our algorithms, these long-term price charts do provide useful context, particularly during periods declared to be unprecedented in journalistic analysis. Below we provide an example of one such chart: copper, back to 1860. [1]

One point, which comes across resoundingly from the historical charts, is how volatile commodity prices can be in the short term, even within a long-term trend that is clear with the benefit of hindsight. A period receiving renewed attention at present is the Great Inflation of the 1970s and 1980s, when the 12-month change in US CPI averaged close to 8% between 1972 and 1983. What is typically remembered of this period is that commodities surged, rebasing to a new price level many times higher than before.

This is true, but a closer look at the data shows the huge short-term variation in this trend. Take gold, for example. The gold price rose by a factor of six from 1971; fell 40% from a 1975 high; increased another sixfold over the subsequent five years; before halving in value from 1980. It was a similar story for other commodities – copper and corn prices had large trends, upwards and downwards, over the same 12 years. Oil, meanwhile, peaked in 1980 and drifted lower, before prices collapsed from the final quarter of 1985 when Saudi Arabia ramped up production. 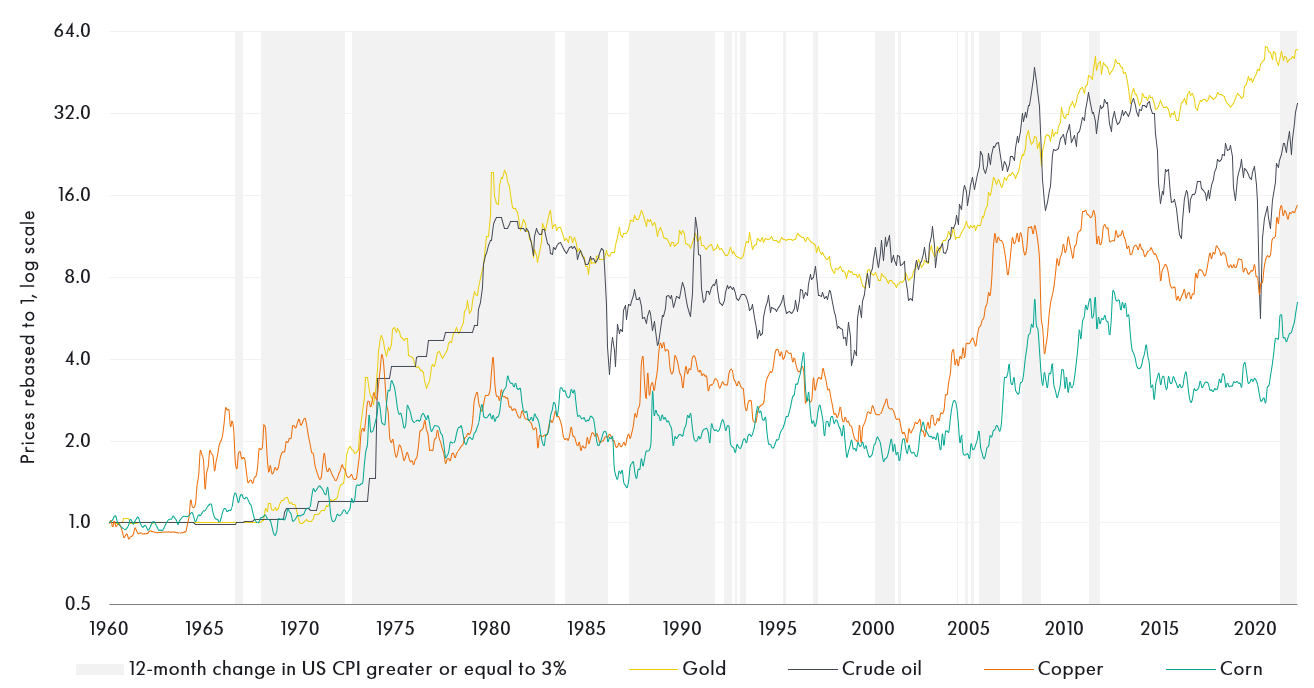 When we backtest our trend-following strategy over this period, we see that our net position in the commodity subsectors would have switched direction several times, albeit with some very strong risk-adjusted performance. The financial sectors would have also contributed to returns, particularly currencies, as policy responses to the surge in inflation diverged between countries.

Commodity prices may very well trend higher from here, but it is unlikely to be plain sailing, and history tells us that some markets could easily trend downwards or sideways for years at a time. Fortunately, the success of our strategy in commodities – or any other sector – is not predicated on a runaway bull market: our trend-following systems will respond to evolving price signals and we continue to build out complementary strategies that are based on other inputs and/or are non-directional.

[1] We compiled a book in 2019 of long-term annotated price charts for 72 markets – please contact your Winton representative to receive a copy by post.