Choked Off: The Six Day War’s Impact on Maritime Trade

On June 5, 1967, Israeli jets launched the opening salvo of a short, but consequential conflict that shut the Suez Canal for eight years.

Looking at how events unfolded following the blockage of this key artery of world trade underscores that geopolitical shocks can have unexpected and long-lasting effects. As shipping has grown more complex, assessing multiple long-term datasets like those Winton considers below can offer up valuable information and potential investment opportunities. Today, the Suez Canal remains a vital economic conduit. It handles a sizeable share of Asia’s merchandise exports to Europe and the United States, particularly since China has designated the waterway as a critical component in its Maritime Silk Road Initiative, investing in container hub facilities along its route.

A week before the canal’s closure in 1967, Egypt had sealed the Straits of Tiran to Israeli ships, prompting Israel to strike at Egyptian airfields. This initiated the Six Day War, which brought the Israeli Defence Force to the eastern bank of the Suez. President Nasser of Egypt immediately closed the canal, planting mines and scuttling vessels for good measure, hoping to force the international community to intervene. But with Nasser unwilling to guarantee Israeli shipping rights, Israeli soldiers stayed put and the canal remained closed for eight years. The visual graphic below depicts how shipping routes changed and adapted in the period following its shuttering:

The closure arguably had a less dramatic short-term economic effect than might have been supposed. The most instantaneous impact was on shipping rates. Oil tankers, en route from the Arabian Gulf to Europe, were forced to take the much longer route around Africa, creating a surge in demand in the time-charter market that was not immediately met by supply.

Cargo insurance premiums and operating costs also increased. As a result, freight rates quadrupled – passed on to consumers as a surcharge. The dry bulk carrier market also witnessed an upswell as grain carriers were hastily converted to carry oil.

The most remarkable change was in fact long-term in nature. The Suez Canal’s former status as the preeminent thoroughfare for crude was never regained, despite the waterway’s geographical proximity to many of the world’s largest oil-producing countries.

The price hikes that followed the Suez’s closure were painful, but it could have been much worse. The experience of the 1956 Suez Crisis – when the canal was closed for six months and severely disrupted Europe’s oil supplies – had served as a wake-up call.

That episode emphasised the need for policymakers and oil executives to reduce reliance on the canal and to develop a larger, more versatile fleet, better able to deal with such shocks in future. By the time the Six Day War commenced, therefore, sources had already been developed closer to the consumer markets of Europe, notably in Libya and West Africa, and the Trans Arabian Pipeline had been opened, which bypassed Suez altogether. In 1956, Britain had relied on the canal for 60% of supplies, but by 1966 that figure had fallen to 25%. 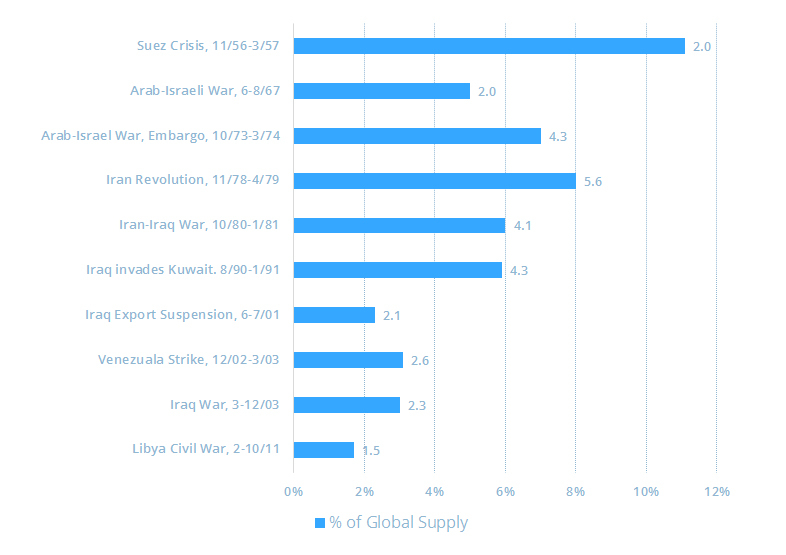 Three other factors that emerged after 1956 made shipping transportation more flexible: combined carriers that could carry different cargoes, shorter charter periods and greater fleet overcapacity. Thus, within a few weeks of the canal’s closure in 1967, 200 tankers carrying a total of 5 million tons had been brought back into service, making good Europe’s supplies.

Point of No Return

Reopening the canal did not result in old trade patterns reasserting themselves. Over the course of the canal’s closure, shippers adapted by introducing ever larger ships in an effort to exploit economies of scale. Sailing a 200,000 ton ship around Africa cost less per ton than a 75,000 ton ship using the canal on the Suez run. This was even more the case after the 1973 oil price shock caused fuel costs to soar.

The upshot was that the Suez Canal had to reinvent itself as a prime channel for containerships, rather than one primarily suited for oil-bearing vessels. The majority of oil tankers were simply too large to fit through the Suez by the time it reopened in 1975. From a peak of 167 million tons before the 1967 closure, oil transits through the canal fell to 30 million tons in 1976. Despite successive expansion projects, they only recovered to 85 million tons in 2004.

What would be the impact of such a closure now? Global seaborne transportation is even more flexible than it was in 1967. The share of international maritime trade flowing through the Suez Canal is lower – at around 8% today, against 15% in 1967. The shipping world also has even greater levels of overcapacity than was the case after the Six Day War, and freight rates are mired at around a 30-year low.

But the Suez Canal is far from dispensable, especially given its importance for containerised traffic. Shipping containers from Shanghai to New York take two days fewer using the Panama Canal than the Suez Canal, but only the latter can handle the biggest containerships now in vogue.

The Six Day War provides a vivid example of a major disruption to a shipping chokepoint. In the event, the maritime economy was able to reinvent itself rapidly. Yet the experience clearly shows that unanticipated consequences can last well beyond first-order shocks.