The “war to end all wars”, as it subsequently became known, was sparked by the assassination of Franz Ferdinand, heir to the throne of the Austro-Hungarian empire.

For almost a month following the archduke’s assassination, financial markets failed to react. There was no discounting of value in the Dow Jones Industrial Average or German government bonds at the prospect of war. It was only when Austria-Hungary issued an ultimatum to Serbia that panicked selling ensued, forcing markets to close.

While many assets suffered during the war, US stocks and commodity prices at times exhibited strong uptrends. And a notable expansion in sovereign debt issuance contributed to a step-change in the evolution of global capital markets.

The five charts that follow outline some of the more notable market events from 1914 to 1918.

1. Investors barely flinched at the assassination of Franz Ferdinand

The outbreak of hostilities caught investors by surprise. The assassination did not significantly move markets, and newspaper reports remained optimistic for weeks after the event. 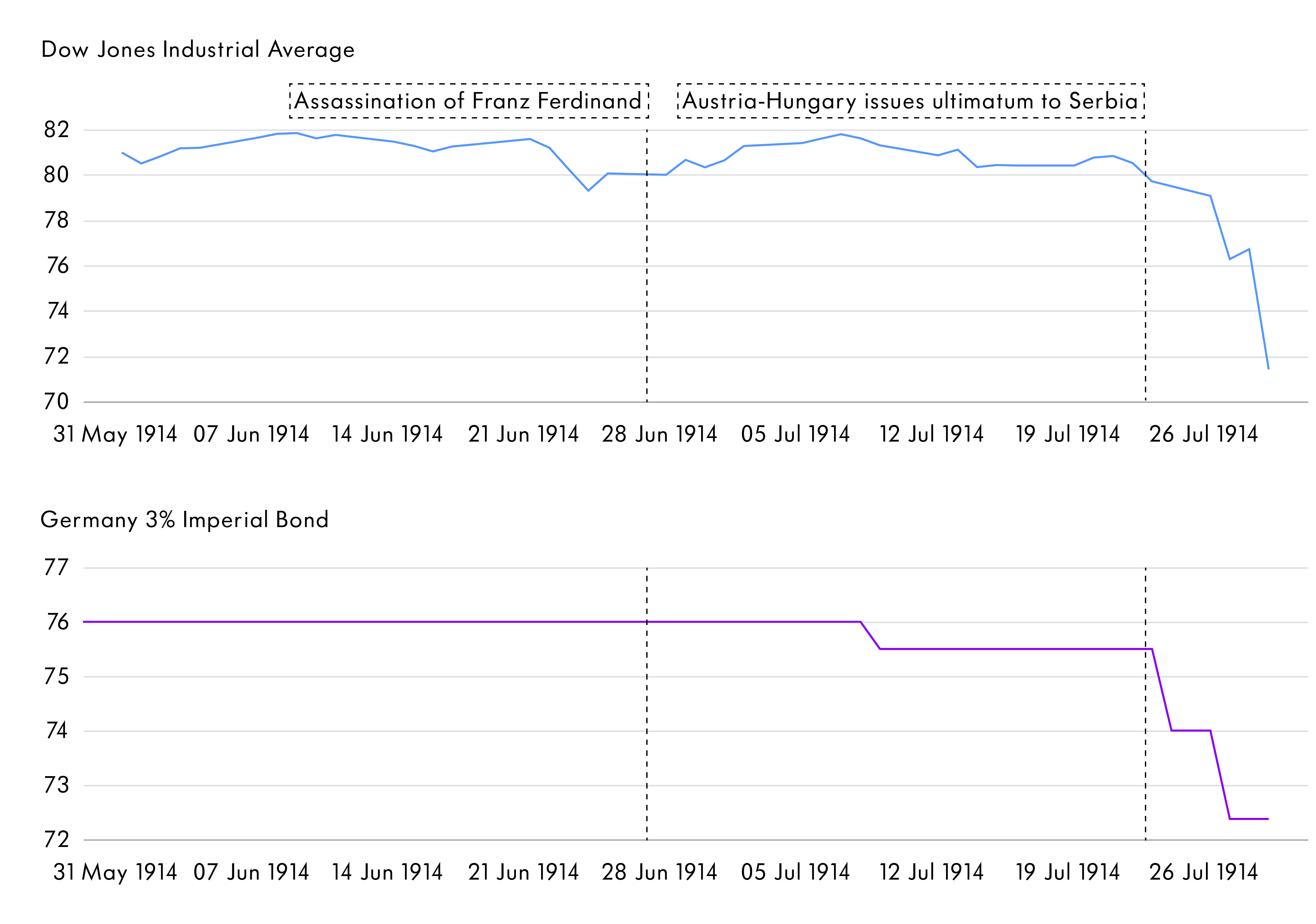 2. Markets seized up as war broke out

Austria-Hungary declared war on Serbia on 28 July. Investors panicked, liquidity dried up, and short-term interest rates spiked, driving governments to take extraordinary measures to shore up financial markets. Nervous and cash-starved Europeans liquidated their US holdings, resulting in the brief depreciation of the US dollar against pound sterling in the summer of 1914. 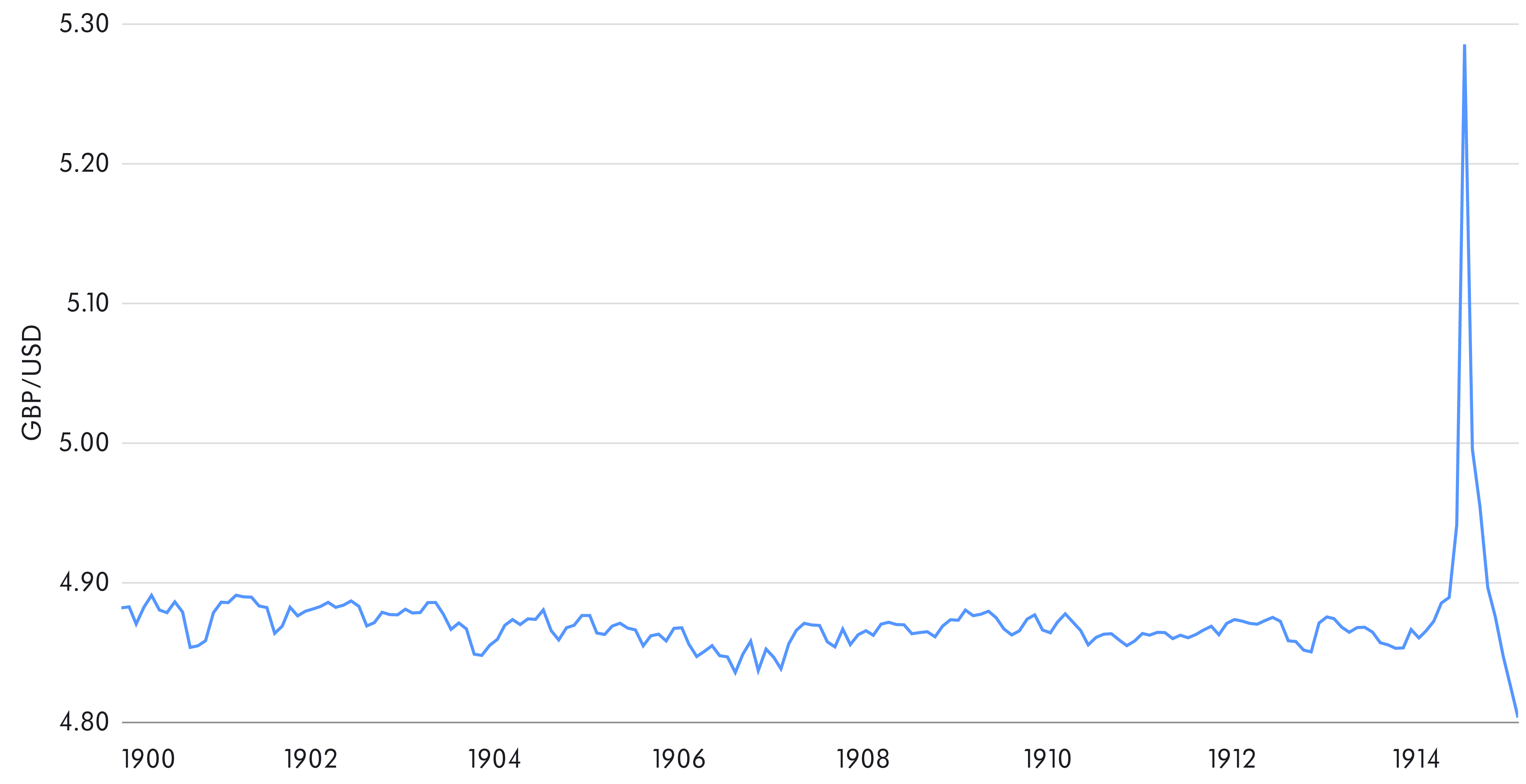 3. Despite early pessimism, US stocks boomed after the NYSE reopened in January 1915 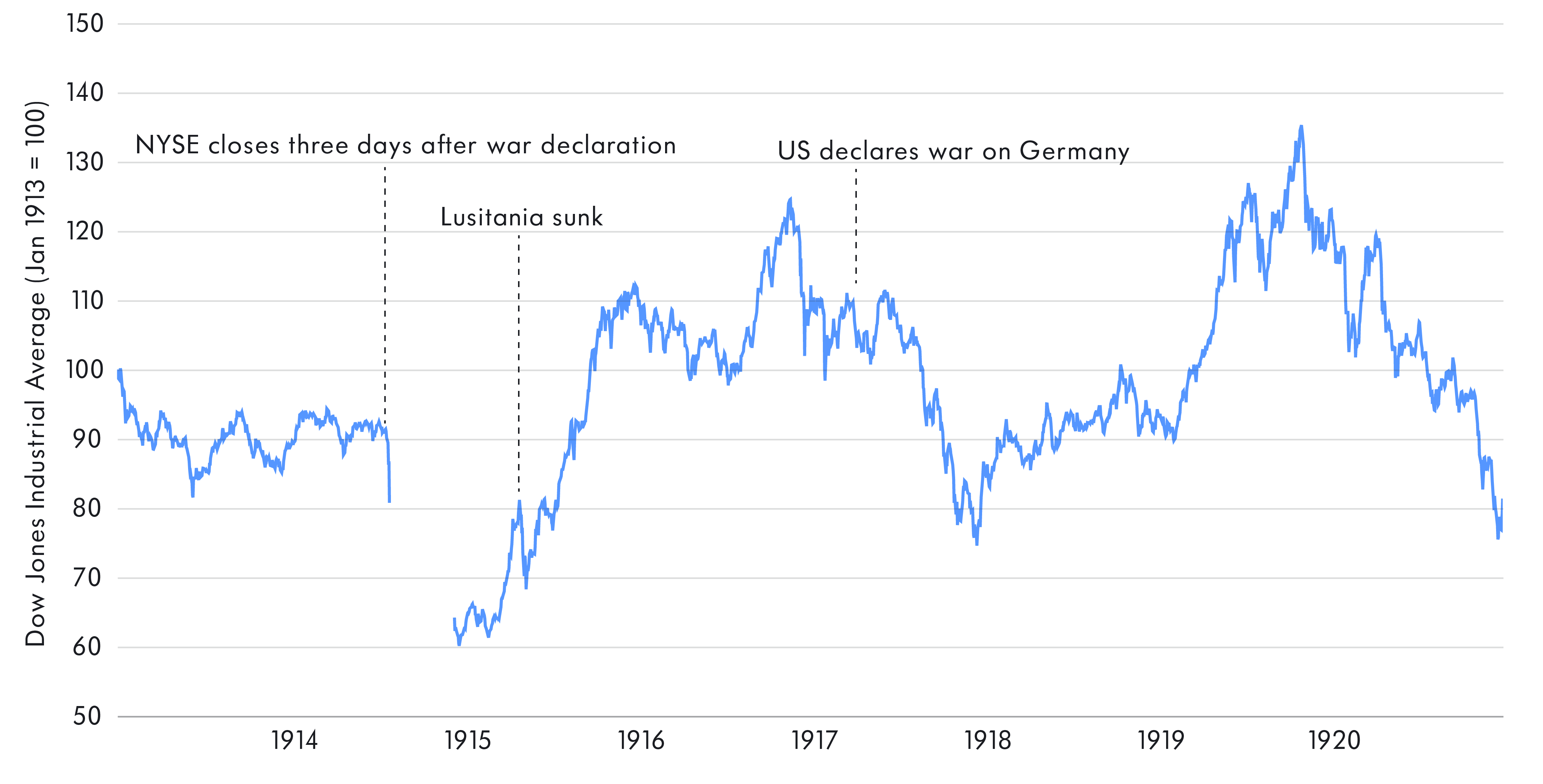 Stock markets across the world were shuttered when war broke out. When trading resumed on the New York Stock Exchange in January 1915, the Dow Jones Industrial Average was trading at 60% of its January 1913 level. But the war was a boon for the neutral United States’ economy, and American stocks rallied, more than doubling by the end of the Battle of the Somme in November 1916. 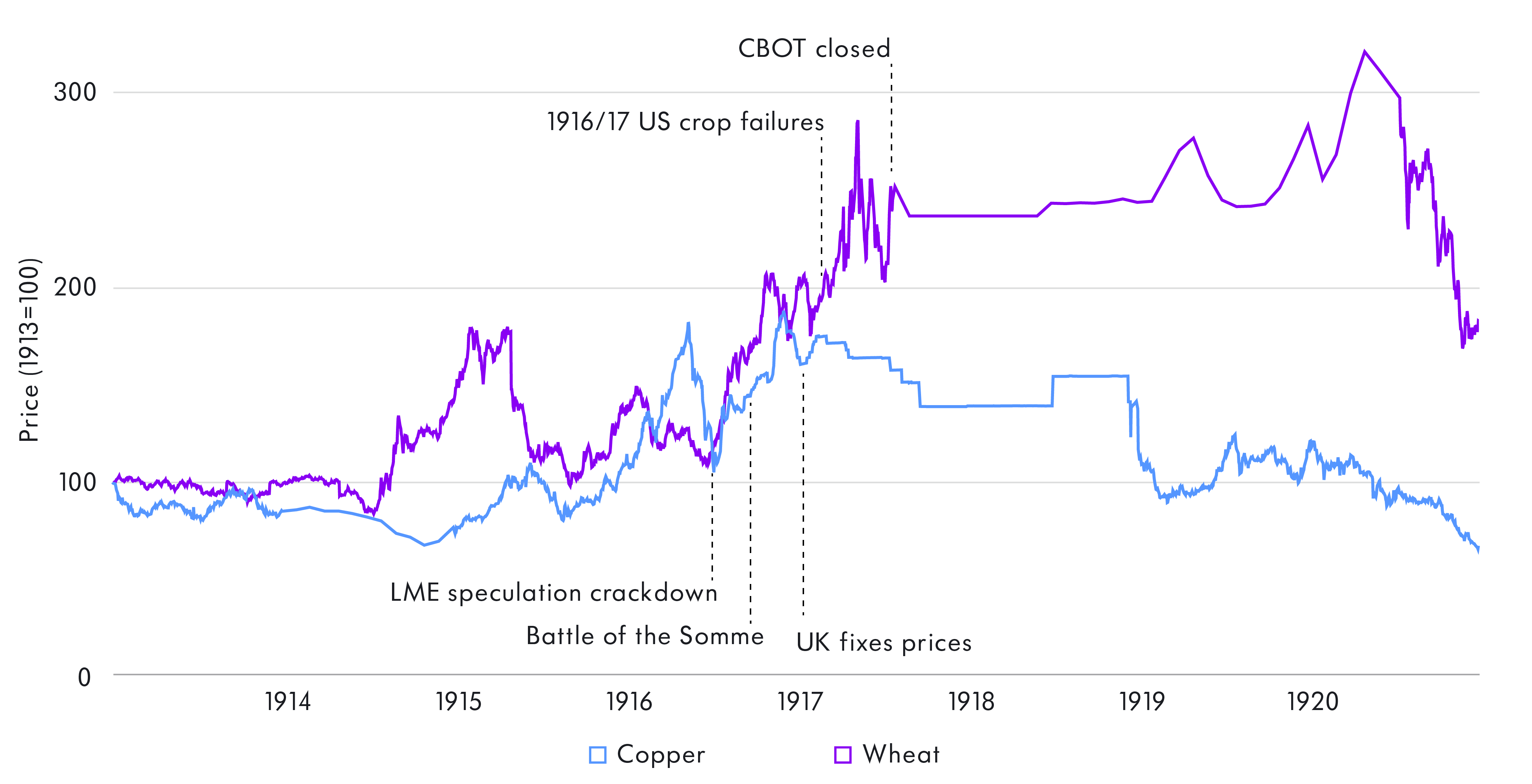 Troops had to be armed and fed. Unsurprisingly, the war delivered rewards for producers of metals and grains who maintained market access. The associated volatility was not welcomed by governments, who cracked down on futures trading and fixed prices.

One of the most striking effects of the war on the investment universe was the enormous supply of sovereign debt it hoisted on markets. Between 1913 and 1920, UK government debt grew 10 times, and US government debt by 8 times. 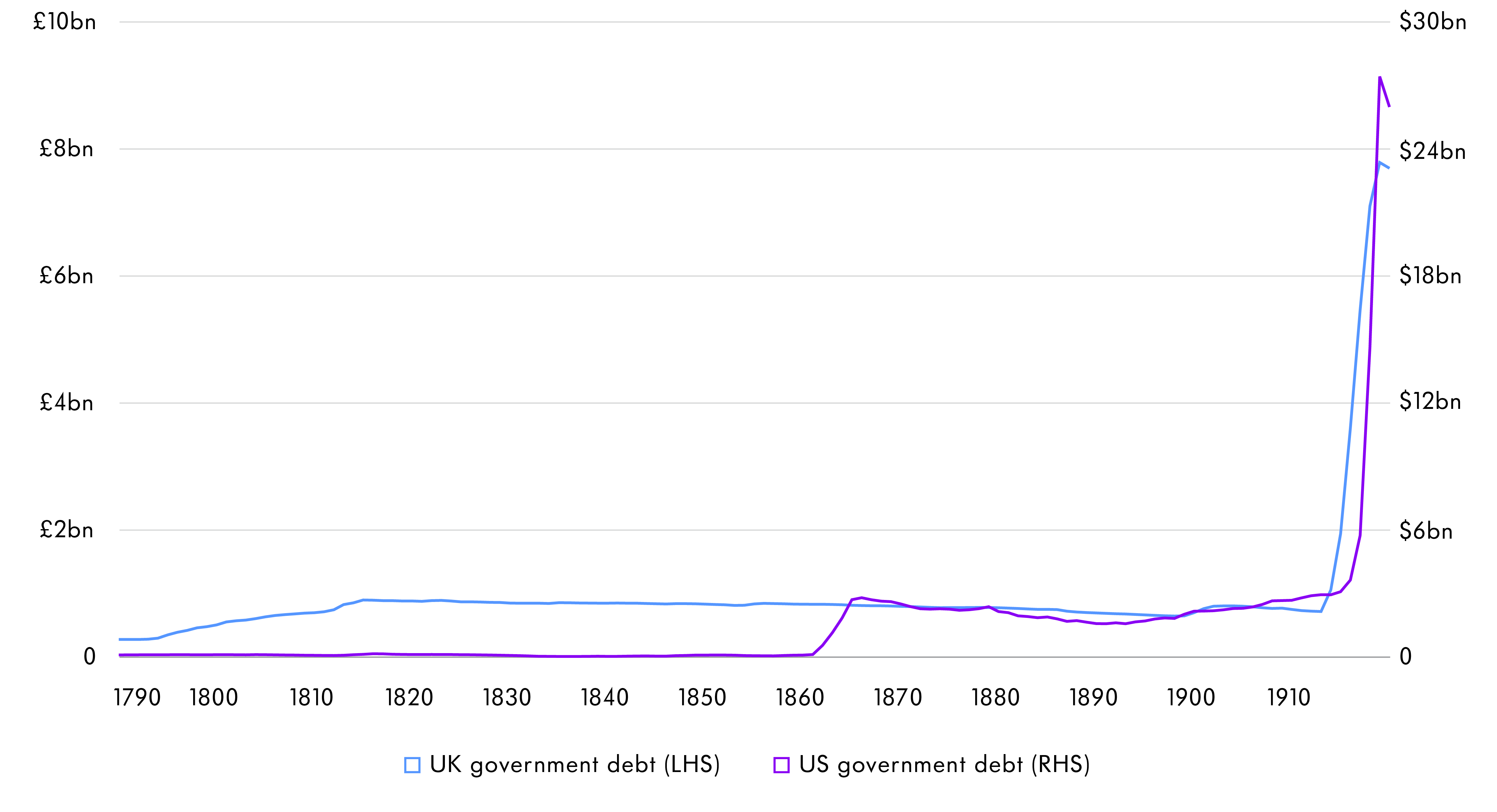 Sources: Bank of England and US Treasury. 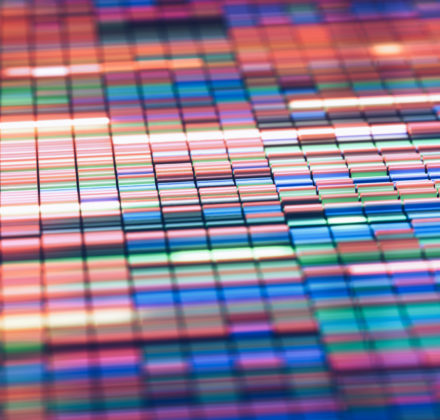