In Memoriam 1987 ‒ A Year That Shook Finance to its Foundations

My personal recollections from the financial market mayhem that began in earnest on 19 October 1987.

The extreme market moves that occurred on what became known as “Black Monday” ‒ and, equally, on the day that followed it ‒ still inform the way that Winton is run today.

I don’t remember leaving our Cannon Street office on the evening of Monday 19 October 1987. But I do remember vividly where I was two hours later at 8:30pm. I was standing at the bar in Kettners, a fashionable Soho restaurant, drinking champagne. Earlier that year, at the age of 26, I had started my own company with two partners, Michael Adam and Martin Lueck. The plan was to try and sell our services collectively to one of the City’s many banks or brokers. The team rapidly became a company, and the company rapidly became a success, surfing a wave of prosperity in Thatcherite Britain.

This early triumph had whetted my appetite for success. Our business traded futures contracts for clients, with us keeping a slice of the profits. I was drinking that night in celebration at least partly because of the profits we had made that day of several hundred thousand pounds. We had been betting on stock markets around the world declining. The British FTSE 100 stock market index had obligingly done exactly that on the Friday before the weekend just gone, on a day when City offices were half empty, following the UK’s worst storm in living memory. That Monday, there had been further heavy falls in American stocks, and we were once again making money for our clients. That’s why I was drinking ‒ to toast the stock market’s decline.

On the one hand, it was stunning news. This was the biggest one-day fall in American stocks of all time. On the other, it was less shocking to me than for most other people working in the stock markets at the time. For one thing, we were short, and we had just made a fortune. For another, months earlier, I had researched and presented a talk upon the 1929 crash with the clear message that such a thing could happen again.

Still, anticipation is one thing; the reality of the crash was another, quite extraordinary one. The news flashed around the world and next morning the newspapers had some of the biggest headlines I had ever seen.

On the morning of Tuesday 20th October, I had an important meeting. Clive had arranged a visit to our offices by Chris Parrott of Frazier Parrott, a US commodity broking business. He was considered brilliant by Clive, who was anxious for us to meet. I was currently Adam Harding & Lueck’s public face, so I met with Chris alone in our only private office, while Mike, Marty, Clive and the rest of the team worked outside.

Sometime after the meeting started, I remember Clive poking his head around the door to say that Bond and interest rate markets were rallying strongly. There followed a succession of visits over the next hour or two, where a lugubrious (nothing out of the ordinary) looking Clive would announce that bonds and gilts had rallied another big point and interest rate futures another 100 basis points. All our glorious profits of the night before were wiped out. And then some. And then some more. By the time Chris Parrott had gone and the rally had petered out, we had lost 25% of our funds. A 10% gain on the month had turned into a 15% loss. The very future of Adam, Harding & Lueck was in doubt within its first year of existence.

Of course, we know now that the great 1987 stock market crash elicited an immediate, “equal and opposite” reaction from Federal Reserve authorities. There is no clearer example of the reflexive dialectic between financial markets ‒ although the rescue of LTCM 11 years later, and the Global Financial Crisis a decade after that, provided two partial reprises. With hindsight, some blame was laid, probably correctly, at the door of the “portfolio insurers”: algorithm-toting professors running trading strategies that overloaded the young S&P 500 futures market with selling.

Thus, while the 19th October is always the most profitable day in any historical trend followers’ simulations, the 20th is always the most lossmaking. Price changes on those days in stocks and bonds were 10s of standard deviations from the norm ‒ or would be if the return distribution were normal and standard deviation thereby a meaningful statistic. Prices moved a lot, and as was to happen in the 2008 financial crisis, normal financial market relationships collapsed, forcing the Federal Reserve into game-changing intervention.

People in general seek fundamental explanations for dramatic events in financial markets. Bad US trade figures a few days before, comments from the Bundesbank: these were explanations offered. But the smoking gun pointed at portfolio insurance exacerbating declines in a somewhat overvalued market. There was talk of computers being at fault; talk that prompted me to write to The Times with a version of: “The fault, dear Brutus is not in our stars (computers) But in ourselves…” ‒ Julius Caesar, Shakespeare. 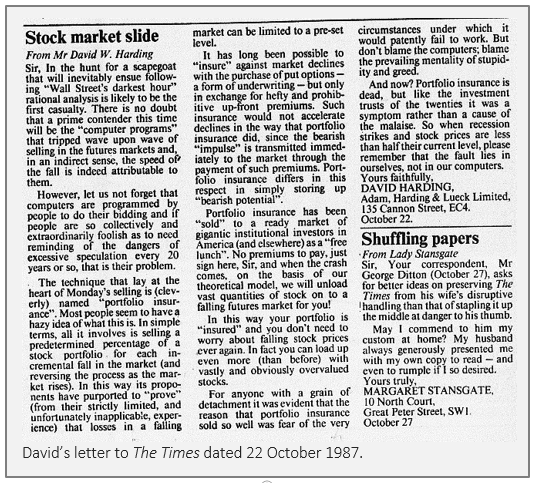 Ultimately, the sharp decline in interest rates prevented further stock market falls and led, gradually, to an accelerating decline in the US dollar, which led to us making back all the losses of October 20th and closing the quarter's trading marginally up.

In my 30-year career in the futures industry since, a move of this magnitude and duration has never been repeated. We have since 2000 had two massive declines, but each has taken place over months or years and have been profitable for Winton and others’ trend-following trading strategies. The May 2010 flash crash was dramatic, but over before we had a chance to react to it.

With the great growth of momentum trading in the markets in recent decades, I have sometimes worried about a repeat of the portfolio insurance phenomenon. Market liquidity has grown, but whether that would help in the event of short-term instability is uncertain.

My concern over the occurrence of another 1987-type event is what has limited Winton's willingness to use leverage. In track-record terms, you only need a significant capital impairment once and your compound rate of return can become zero forever.

Belief in the general framework of market efficiency was surprisingly unaffected by the events of 1987. Were the efficient markets hypothesis really a hypothesis, that day’s events would have been enough to refute it. Academic economists somehow managed to pull the frayed threads together, and continue to do so to this day. They seem resistant to the notion that markets might be anything other than perfect.

Today, more than $600 billion is invested in so-called “smart beta” exchange-traded funds ‒ most in strategies that assume returns will flow from any risk that can be defined. Yet financial market history is characterised by discontinuities. What academics somewhat benignly term “fat tails” are in practice events that shake the world’s financial system to its foundations. It is our intention, in the event of the repeat of a sequence of events as dramatic as those of October 1987, not to be among our clients’ main problems.